Just like the Weekly Updates, how I write Map Mondays will be changing as well. They still will read the same and I will be making the final decision on what are the best maps of last week, but now I am taking your opinion into account as well. I will post maps that catch my fancy on Facebook and Twitter, so don't forget to follow me there if you haven't already. I share a lot of other stuff on social media that I don't always feature on The Update so that is another reason to follow me as well.

Anywho, once I see what people have to say about the maps I share I will make my decision on what map deserves the Map Monday crown. So congrats to Anekcahdep for his map of Britain divided between the Chinese and Aztecs: 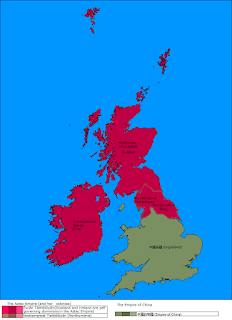 I wish I could come up with a better title for the map, but Anekcahdep wasn't forthcoming about what he called it. Even the file name was just the map contest it was created for. Regardless, in this timeline Mohammed was never born and thus the Middle Ages never ended for Europe. The rest of the world, however, progresses rather rapidly and eventually China and the Aztec Empire begin to divide up the world, including the bickering states of Britain and Ireland. The Aztecs get Ireland, Scotland and northern England, while the Chinese take Wales and the rest of England.

What I like about this map is that it features a fun scenario that you don't see very often in alternate history. Timelines where Europe is divided up between non-European empires gives us a lesson in what colonialism is like that can't always be taught in the history books. If you want to read other timelines that show Europe being gobbled up by alternate imperialistic powers, check out Easternized World on the AltHistory Wiki.

Honorable mention this week goes out to SoaringAven's Ukrainian Crisis. If you want to submit a map for the next Map Monday, email me at ahwupdate at gmail dot com with your map attached and a brief description in the body of the email.