Preview: Never Wars: The US Plans to Invade the World by Blaine L. Pardoe 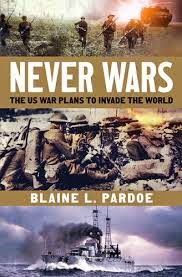 Got the next book I will be reading after I finish Turtledove's Joe Steele. It is called Never Wars: The US Plans to Invade the World by Blaine L. Pardoe and here is the description from Amazon:

Every major government’s military plans for waging wars, hoping that they never have to be employed. In the early part of the last century the US government prepared a number of war contingency plans for invading a number of nations— both hostile and friendly. These color-coded plans were designed for various political and military events, some of which actually unfolded in the Second World War. Never Wars explores and provides details on a number of these key military invasion plans, their triggers, units involved, etc. Some of these plans, if executed, would have altered the globe or changed the events of the twentieth century and beyond. Included with this was the 1914 war plan against a triumphant Germany, a 1935 plan to attack Great Britain, the 1920s US plans to land forces in Mexico to topple their government, a plan for invading China and even a 1905 strike into the heart of Canada. From a plan to invade the Azores to an incursion into Cuba, Never Wars presents never before published plans for the US to strike out at the world.

This book seems rife with alternate history potential so I am looking forward to reading it.