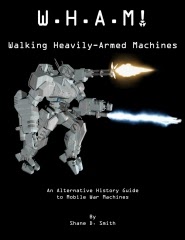 Early 1940, somewhere in northern France: You sit at the bottom of your foxhole, nervously checking the magazine on your rifle for the umpteenth time and swearing at the Recruitment Sergeant that convinced you to join up "for a life of adventure". Rumour has it that the balloon will go up sometime in the next few days, but as usual, no-one is telling a lowly private like you anything. You hear a low thumping sound in the background, it seems to be coming from the enemy lines and is getting louder. Suddenly there's a shout of "they're here!" and you jump up to your firing step. Soldiers with coal-scuttle helmets and grey uniforms are running through the fields, and now you see the source of the thumping noise: giant metal monstrosities on four legs walking towards you at what looks like an impossibly high speed for something so big. Panzers - enemy Crawlers! You fire at some of the troops and they seem to go down, but then one of the panzers turns its "head" towards you, and the last thing you see is a flash....

Welcome to the world of Walking Heavily Armored Machines, or WHAMs, from the mind Shane D. Smith. In this world, Leonardo Da Vinci's designs for a 4-legged walking machine powered by clocksprings were turned into reality, and while initially only acting as novelty pieces, soon developed into the pre-eminent war-fighting vehicle for the ages. As the centuries progressed, so did the technology, with clocksprings being replaced by steam power, then by petrol, gas turbine, nuclear fission, and finally in the 2020s, by fusion power. This book charts the state of the art in Walker design from the early days, though the two World Wars, the Cold War, the space race and lunar settlement, right up to the Mars conflict in the 2040s. As technology advanced, WHAMs developed into two distinct types: 4 legged heavily armoured "crawlers" and after the innovations of the Wright brothers, small, fast, agile 2-legged "striders". Think AT-ATs and AT-STs from Star Wars, or the Clankers from Scott Westerfield's Leviathan series, with later striders more resembling Gundams. In this world, tanks and aircraft only fill niche areas, with their roles being taken by the crawlers and striders respectively (the striders have rocket packs which allow for limited jumping maneuvers).

This book isn't a novel as such, it's more a reference/companion piece for a strategy game of the same name. It's laid out as a technical manual, with diagrams, technical statistics and a description of how each W.H.A.M was developed - think "Jane's Book Of Military Walking Machines" and you're going in the right direction. As such, it's not overly easy to read/review as an AH piece, as you're almost reading it more for the back-story of the development than the technical history. The history of OTL tanks and aircraft seems to be lovingly recreated here in mecha form, with German Tiger crawlers facing up against 4-legged Soviet T-34s on the WWII Eastern Front while Spitfires and Messerschmitt striders tangle in the fields of France, and two-legged Zeroes face P-51s in the Pacific. In some ways though, this is a little bit too "find/replace" to be totally logical, like how do the Battle of Britain and the attack on Pearl Harbour really work out with striders that can only jump a few hundred meters at a time - and even then, only once or twice without needing to to refuel? If technology developed along such radically different lines, would you really have a strider called the F-14 Tomcat being built by a company called Grumman? And if the striders are the fighter planes of this AH world, what are the bombers? For ppl who like their AH more reality-based, this is a bit niggly and hand-wavey, for those who don't really care and are reading it for a bit of fun, it's a nice way to have things familiar but not too familiar.

What is well done here is the slight but consistently cumulative departures from OTL technology, with the use of particle beam weapons etc coming along in what felt like the "logical" time for the mechs in question (and tesla cannons on crawlers? Made me want to go back and play Command & Conquer again!). The second and third space races and the Mars conflict were quite well introduced as well. All in all, once you get used to the content layout, this is a good introduction to a "brave new world". What would be really good to see would be a franchise based on this idea, with some actual novels base in the W.H.A.M universe (or even a movie!), but until that point, this book is a good intro to what looks like a potentially promising new world of big mechanical things blowing each other up.

Editor's Note: If your readers are interested, the author Shane has made available a code for $5 off the book or the game ($10 discount total if you get both) if you buy it on CreateSpace: XSRHXXXC. They are also available on Amazon, but without the discount.
Posted by Mitro at 11:00 AM