Xandra Vardan thought life would be simpler when she accepted the goblin crown and became their queen, but life has only become more complicated. Everyone -- vampires, werewolves and humans -- wants the goblins on their side, because whoever has the goblins -- wins.

Queen Victoria wants her head, Alpha wolf Vex wants her heart, and she still doesn't know the identity of the person who wanted her blood. What she does know is that a project from one of the 'secret' aristocrat labs has gotten free and she's the only one who can stop the perfect killing machine -- a sixteen year-old girl. With human zealots intent on ridding the world of anyone with plagued blood and supernatural politics taking Britain to the verge of civil war, Xandra's finding out that being queen isn't all it's cracked up to be, and if she doesn't do something fast, hers will be the shortest reign in history.

The fantastic conclusion to the series that started with the spectacular undead steampunk debut, God Save the Queen and The Queen is Dead.

In 1862, Union army infantryman Samuel Dakota changed history when he spilled a bottle of pilfered moonshine in the Virginia dirt and stumbled upon the biochemical secret of flight. Not only did the Civil War come to a much quicker close, but Dakota Aeronautics was born.

Now, in Andy Marino's Uncrashable Dakota, it is 1912, and the titanic Dakota flagship embarks on its maiden flight. But shortly after the journey begins, the airship is hijacked. Fighting to save the ship, the young heir of the Dakota empire, Hollis, along with his brilliant friend Delia and his stepbrother, Rob, are plunged into the midst of a long-simmering family feud. Maybe Samuel’s final secret wasn’t just the tinkering of a madman after all. . . .

What sinister betrayals and strange discoveries await Hollis and his friends in the gilded corridors and opulent staterooms? Who can be trusted to keep the most magnificent airship the world has ever known from falling out of the sky?

Young ex-slave Gideon Bardsley is a brilliant inventor, but the job is less glamorous than one might think, especially since the assassination attempts started. Worse yet, they're trying to destroy his greatest achievement: a calculating engine called Fiddlehead, which provides undeniable proof of something awful enough to destroy the world. Both man and machine are at risk from forces conspiring to keep the Civil War going and the money flowing.

Bardsley has no choice but to ask his patron, former president Abraham Lincoln, for help.  Lincoln retired from leading the country after an attempt on his life, but is quite interested in Bardsley’s immense data-processing capacities, confident that if people have the facts, they'll see reason and urge the government to end the war. Lincoln must keep Bardsley safe until he can finish his research, so he calls on his old private security staff to protect Gideon and his data.

Maria “Belle” Boyd was a retired Confederate spy, until she got a life-changing job offer from the Pinkerton Detective Agency. Pinkerton respects her work, despite reservations about her lingering Southern loyalties. But it’s precisely those loyalties that let her go into Confederate territory to figure out who might be targeting Bardsley. Maria is a good detective, but with spies from both camps gunning for her, can even the notorious Belle Boyd hold the greedy warhawks at bay?

Another rollicking alternate history from Cherie Priest—Fiddlehead is the fifth book in the Clockwork Century steampunk series that started with Boneshaker.

Arcana Comics & SteamPunk Originals collects the first four chapters of an epic SteamPunk future set in the World of Oz. A century after the witch was killed, the Emerald City is ruled by a once-revered hero, and salvation comes from the unlikely wrench of young Victoria Wright. She comes to find out the smallest of actions can have much larger implications, and the most insignificant of us can change the world. Rediscover old friends and new heroes along the way, and learn how something that was once a gift... can turn into a curse.

Marshal versus the Assassins by M. Harold Page 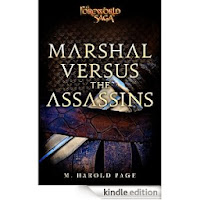 Sir William the Marshal, legend in his own time, has promised to go on crusade, a vow made to his Young King as he lay dying. But when the Oliphant, legendary war horn of Roland, is stolen by the lethal Assassins, he’s charged with returning the relic in order to stop the very thing he’d vowed to undertake—a crusade; this one engineered by the thieves.

With his small band of trusted companions—Sir Baldwin, his tourney compatriot; Eustace, his squire; and Henrik, the giant Norseman—William sets out to take back the relic. But treachery abounds, and when William loses two of his companions, he discovers an unlikely ally—Da’ud, an Assassin himself, bent on taking the Oliphant from the heretic faction that has stolen it. The three fight their way across land, sea, and desert, only to find themselves facing an army…and the Oliphant within their grasp.