The Update is once again a contestant in Underground Book Reviews Battle of the Book Review Blogs. Go an vote for your favorite alternate history blog now!

Update: The Daedalus Incident and The Enceladus Crisis by Michael J. Martinez

Friend of The Update Michael J. Martinez was again in the news last week. For those who don't know, he is the author of the Daedalus Incident. Here is the description from Amazon:


Mars is supposed to be dead…a fact Lt. Shaila Jain of the Joint Space Command is beginning to doubt in a bad way.

Freak quakes are rumbling over the long-dormant tectonic plates of the planet, disrupting its trillion-dollar mining operations and driving scientists past the edges of theory and reason. However, when rocks shake off their ancient dust and begin to roll—seemingly of their own volition—carving canals as they converge to form a towering structure amid the ruddy terrain, Lt. Jain and her JSC team realize that their realize that their routine geological survey of a Martian cave system is anything but. The only clues they have stem from the emissions of a mysterious blue radiation, and a 300-year-old journal that is writing itself.

Lt. Thomas Weatherby of His Majesty’s Royal Navy is an honest 18th-century man of modest beginnings, doing his part for King and Country aboard the HMS Daedalus, a frigate sailing the high seas between continents…and the immense Void between the Known Worlds. Across the Solar System and among its colonies—rife with plunder and alien slave trade—through dire battles fraught with strange alchemy, nothing much can shake his resolve. But events are transpiring to change all that.

With the aid of his fierce captain, a drug-addled alchemist, and a servant girl with a remarkable past, Weatherby must track a great and powerful mystic, who has embarked upon a sinister quest to upset the balance of the planets—the consequences of which may reach far beyond the Solar System, threatening the very fabric of space itself.

Set sail among the stars with this uncanny tale, where adventure awaits, and dimensions collide!

Mike was interviewed over at SF Signal and did a guest post over at Bastard Books (what a name!) where he, among other things, discussed the upcoming sequel The Enceladus Crisis coming out next spring. go check it out. 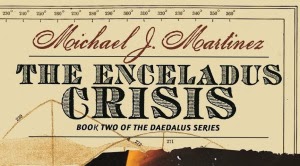 An interesting historical revisionism/secret history about the legend of Robin Hood caught my eye the other day. It is called Hunter of Sherwood: Knight of Shadows and is written by Toby Venables and published by Abaddon Books. Here is the description from the press release:


Robin Hood is a cold blooded killer and Richard the Lionheart is a ruthless butcher who cares nothing for England – Toby Venables is taking one of the most beloved English folk legends turning it on its head.

This is the story of Guy of Gisburne. Portrayed in legend as a lackey to the Sheriff of Nottingham, Knight of Shadows reveals Guy as an outcast, a mercenary, and now newly knighted, an honourable servant of King John in his intrigues against the vicious and bloodthirsty Lionheart.

Tears up the clichés of the Robin Hood myth to reveal the deeper issues between this chaotic period of English history, Knight of Shadows will delight readers of Bernard Cornwell and the Flashman series, as it deftly weaves history and legend into a brand new pattern, with Gisburne firmly at the heart of events.

Guy’s mission is to intercept the jewel-encrusted skull of John the Baptist from the clutches of the Knights Templar before it can reach Philip, King of France. Gisburne’s quest takes him and his world-weary squire Galfrid into increasingly bloody encounters with ‘The White Devil’: the fanatical Templar de Mercheval.

Relentlessly pursued back to England, Gisburne battles his way with sword, lance and bow. But if he survives there lies ahead an even more unpredictable adversary!

As a fan of Robin Hood since my dad would read me the old tales as a kid at night, I might actually check this out.

If you are playing Europa Universalis IV, here are some announcement you probably want to check out.

Paradox issued last week an update to Europa Universalis IV, the empire building strategy game. The new update implements hundreds of fixes, feature updates, balance adjustments, checks, including support for windowed fullscreen, new idea groups for more than 20 nations, and a “suggest demands” button which will automatically populate a peace offer that the AI will accept when trying to end a war.

New DLC packs have also been released for those players who would like to expand upon their empire expansions, entitled “American Dream” and “National Monuments II,” adding in the opportunity to play out the American Revolution through in-game events, and then go out and conquer several new iconic landmarks around the world. The new update is free to all Europa Universalis IV players whether or not they purchase the DLC.

If there are any other game studios you want me following, please let me know.

David Barnett on Being a “Sci-Fi” Writer at SF Signal.
Full steampunk ahead: Newfane author Bruce Hesselbach pens Perpetual Motion, a pre-World War I romance novel by Nell Curley at The Commons Online.
Your Daily Recommended Dose of Steampunk Murder! by Charlie Jane Anders at io9.

5 Ridiculous Myths You Probably Believe About the Dark Ages by J. Wisniewski at Cracked.
Alternate History: Aaron Carter by Kevin Noonan at The Observer.
The 'alternate history' of Australia's Top End by Xavier La Canna at 105.7 ABC Darwin.
Alternative history – a look at the Concordat of 1827, or what could have been at In Caelo et in Terra.
The Anti-Defamation League's New Counterfactual Advertisement by Gavriel D. Rosenfeld at The Counterfactual History Review.
Black Aviators in the Diesel Age at Chronicles of Harriet.
The Day the World Nearly Ended by Sean Korsgaard at Korsgaard's Commentary.
The wildly speculative alternate history of Christopher Columbus’ voyage at Extraordinary Experiences.

Argo and Alternate History by John Birmingham at Cheeseburger Gothic.

The Baskerville Affair: A Study in Silks by Emma Jane Holloway at Falcata Times.
The Chaos Engine at Diehard GameFAN.
Elementary 2.1: "Step Nine" at Thinking about books.
Revolution 2.1: "The Last Surviving Friend" at Paul Levinson's Infinite Regress.
Sherlock Holmes: The Stuff of Nightmares by James Lovegrove at Falcata Times.

Time Travel Adventures with Conservatives at The Colbert Report.