1636: The Devil's Opera by Eric Flint and David Carrico

It is the year 1636. The United States of Europe, the new nation formed by an alliance between the Swedish king Gustavus Adolphus and the West Virginians hurled back in time by a cosmic accident, is on the verge of civil war.  His brain injured in the war with Poland, the USE's emperor Gustavus Adolphus is no longer in command. Enter Swedish chancellor Oxenstierna, a leader of aristocratic reaction against democracy.  His goal:  to assemble the forces of the hidebound ruling class in Berlin and drown the revolution in a bloodbath.

In Magdeburg, the capital of the USE, Mike Stearns' wife Rebecca Abrabanel is organizing popular resistance to Oxenstierna's plot. As part of the resistance, the American musician Marla Linder and her company of down-time musical partners are staging an opera that will celebrate the struggle against oppression. Princess Kristina, the heir to the USE's throne, is now residing in Magdeburg and is giving them her support and encouragement.

But another plot is underway--this one right in the heart of the capital itself, and with murder as its method. The only people standing in the way are a crippled boy and the boxing champion who befriended him, and an unlikely pair of policemen. Can the American detective Byron Chieske and his down-timer partner Gotthilf Hoch thwart the killers before they succeed in their goal?

Alternate Histories of the World by Matthew Buchholz This remarkable collection of maps, photographs, engravings and paintings from the early ages to modern day provides a stunning new look at the world as defined by our struggles and alliances with the monsters and supernatural creatures that have defined our existence. Learn how a mechanical man helped write America’s Declaration of Independence. Track the course of the Living Dead virus from Africa to Europe and on to the New World. View artifacts from our uneasy alliance with the Martian race, or simply delight in the vibrant colors and illustrations from a bygone age. More than 100 full-color images and insightful essays make this book an essential addition to the libraries of dedicated historians as well as casual fans of monsters and mayhem.

Stephen Baxter’s “imaginative [and] bold” (Daily Mail, UK) Stone Spring drew readers into an alternate prehistoric scenario. Now, thousands of years have passed, and a wall that was built to hold back the sea must now hold back the advancing armies of a reviving Troy....

Created by the building of the Wall, Northland has become a society of prosperous, literate, and self-sufficient people. Inhabited from end to end, the Wall is a linear city stretching for hundreds of miles, and a wonder of the world.

For millennia, the Wall has also kept the growing empires of the Bronze Age at bay. But a new and turbulent age is dawning. For any wall, no matter how strong, can be breached—particularly from within.…

The year is 1899 and the world is coming to an end. An epic in four movements, this is the third book in Robert Rankin's highly acclaimed meta-Victorian series, after Japanese Devil Fish Girl and The Mechanical Messiah

Comparable to Terry Pratchett or Douglas Adams, the father of far-fetched fiction has pulled out all of the stops with this riotous tale of wicked women, a dangerous detective, and Darwin, the educated ape. Lord Brentford has a dream: to create a Grand Exposition that will showcase the wonders of the worlds and encourage peace between the inhabited planets of Venus, Jupiter, and Earth. Ernest Rutherford has a dream: to construct a time ship, powered by the large hadron collider he has built beneath the streets of London. Cameron Bell is England's greatest detective and he, too, has a dream: to solve the crime of the century before it takes place, without blowing up any more of London's landmarks. Darwin is a monkey butler and even he has a dream: to end man's inhumanity to monkey and bring a little joy into the world. Lavinia Dharkstorrm has a dream of her own, although hers is more of a nightmare: to erase man and monkey alike from the face of the Earth and to hasten in the End of Days. Then there is the crime-fighting superlady, all those chickens from the past, and the unwelcome arrival of the Antichrist. Things are looking rather grim on planet Earth. 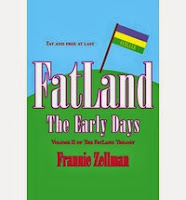 The hidden history of FatLand -- a territory established by people seeking freedom from the oppressive Pro-Health Laws of the United States of America -- is revealed in Volume II of The FatLand Trilogy. They only wanted to build a land where they would be accepted. But when three archivists set out to discover how FatLand began, they quickly become aware that someone doesn't want them to know. They may be opening a Pandora's Box of secrets they aren't meant to uncover. Seven thousand miles away a woman summons the courage to write about FatLand's beginnings, knowing her life will be in danger the moment the FatLand Board receives her memoir. As the four of them race to record their findings and insights, the early history of FatLand reveals itself in violence and heroism, and in the bravery, determination and treachery of its founders.