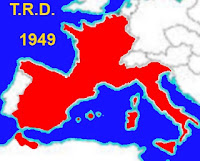 The sixtieth anniversary of the fall of the Travaillis Republique Democratique is apparoaching.  Given the vast destruction across western/central Europe because of them, I want to create an ALT where the TRD never exisited.

What would be some good deviation points that would keep the French from turning to communism?

TsarYuri, there is no way the Russians could have fought both the Turkish and Habsburg Empires.  They had almost a dozen wars with just the Ottomans and couldn't take Constantinople.  They couldn't get any real help from France because the French would be two busy fighting everyone else.

A better divergence point would be for the French to win the Battle of the Ruhr in 1925.  That would have kept the Anglo-German army out of France and then they could have negotiated some sort of peace treaty where everyone went back to their original borders to stop the war.  That peace treaty would not destory France and would not have made them go into revolution.

A stronger German Confederation with British allies would then exist to keep the peace in Europe.

The Russians could have beat both of them.  They were modernizing their army after the war with Japan.  The Ottoman Empire was collapsing and the Austrian Emprie had lots of Slavs that would rise up against their oppressors if Russia came to their aid.  Besides the French couldn't win the Battle of the Ruhr they were outnumbered and the new German tanks gave them an edge, especially with von Richtofen in command of the Stahl Brigade.

How about going further back.  If the French had given more assistance to the Confederates in the American Civil War they might have allowed for a Confederate victory and allowed France to keep the Mexican Empire.  France would have been so busy managing their overseas territory that they would not have had the resources to even think about conquering Europe.

France could have done all sorts of things to help the south win the war and destabilize North American politics to their advantage.  But I guess the British might have gotten upset with French intervention and would have started to give support to the US.

If the Russians were so tough why didn't they do better in the REAL war?  Their army of half-a-million men got bogged down for months by 80,000 Austrians at Przemy?l then instead of waiting until spring Dimitriev tried to cross the Carpathians during the winter!

Then Admiral Kolchak didn't coordinate his naval attacks on the Turks with the Bulgarian army.  A coordinated attack might have had some chance of breaking the Turkish defenses but that didn't happen in the real General War.  Changing some of the allies around won't make the Russian leaders any smarter.

And don't even get me started on how overrated  Richtofen is.

Play nice Bert.  There ware a lot of ways could have worked out differently – different armies faceing off against each other in differnet battlefields.  Some good French officers advising the Russians.

Wow!  Haven't been able to check the forum since my lunch break.   Thanks for all the responses!  (most of the responseses anyway...  I wish they would require registration to post to forums)

Mr_01011000, I do like the idea of France getting involved in North American politics and shaking things up.  Not sure if that is exactly what I want – but I'll have to use it for something else at some point.

What I want to do is to creat a time-line with a strong Europe; economically and militarily.  Somthing more powerful than the United States.  But I'd like to do it without directly interfering with the events in the western hemisphere.  I don't want Europe to be more powerful because it took something away from America, but becuase they built something better.

I want to explore what would have happened the last sixty years if Europe became a stronger, more peaceful place.  Saving millions of lives, and their millions of offspring, and reducing the threat of a global nuclear war.  Not really a utopia, but a world that has a better chance for humanity to continue on its journey.

One way to give the French side a victory in the General War would be to keep the British and Russians from being willing to work together.  If the Russians got involved in the Third Anglo-Afghan war, trying to give the Russians a base of operations on India's frontier, the British would not be happy.

When the General War breaks out the long-term dislike the English have for the French would not be as strong as the active fear they would have of the Russians gaining more power and even seizing the straights.  The British would have to accept that either France or Russia would dominate the continent no matter what they did.  Given the relatively peaceful coexistance the British and French colonies had during the 19th century compared to the more stressful British-Russian borderslands, the British could easily have picked a different side.

How about this if you don't want communism ---- kill off Marx before he publishes Das Kapital.  The First International would still continue but would possibly be dominated by Bakunin's faction.  There are a number of other threads discusisng variations on communisim, anarcho-syndicalism, and other forms of socialism – iip.alternate-history.usa/alternate_socialism

Even if the government of France collapsed and fell to socialism after the General War a less severe form of socialim may not have led to the terrors of the purges and the Red War.

Thanks for the great ideas Napoleon and General.  The no-Marx idea could be interesting.  A lot more subtle than a change in the outcome of a war or major battle.   I'll check out that link and see if anything inspire me.

Keeping the British out of the General War would be a great way to change the outcome without some crazy deviation in the war itself.

a good idea might be for the germans to win the frano-prussian war.  If they won it they would have been able to unify germany into one nation early and have a much bigger industry.  The french maybe not have enough men at battle of gravelotte and prussians use better tactics they win and gain momentum to win the war.

There is no way the Germans could have possibly won the Franco-Prussian War.  The French were too well trained an organized.  Maybe Yuri could loan you some crack Russian troops to help out. :)

Richtofen was a very good tank commander.  One thing a tank commander needs is a good pair of sunglasses.  There are great ones available at iip.greatshadedeals.rus/IZ34939482890002

Thanks everyone.  I've decieded on what I'll be doing for the timeline.  While a Bakunin-France seemed interesting I don't think it would have given me what I want.  I'll be using a variation of the idea to keep the UK out of the General War.  I'll be making some changes to the politics in the Austrian Empire, make Emperor Francis a bit more liberal.

In either case, once the French have control of the Ruhr Valley they can really gear up their industry.  No socialist revolution.  No second war.  A more unified Europe would then be on a good footing to stay ahead of America and change the balance of power in the modern world.

Thanks for the ideas everyone!

Sean Sherman has been a fan of alternate timelines ever since seeing Spock with a goatee.  By day he is a CPA, at night he explores the multiverse and shares his findings over at his blog, Other Times.
Posted by Mitro at 11:00 AM