Holy crap what a long Weekly Update, I actually had to split it into two parts. You will see the rest of last week's news this afternoon.

No time to editorialize, too much to talk about. All I want to say is that tomorrow's New Releases post is cancelled since there is only one alternate history work coming out this week and I am moving its announcement to next week. Instead I will be sharing a book giveaway that I think you will all enjoy.

What if Romney had won? 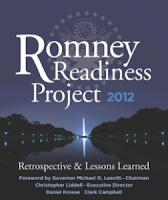 It still might be too early to dust of your President Romney timeline (although that hasn't stopped some people) since it has only been a year since the 2012 US presidential election, but people wanting to write such an alternate history should check out the Romney Readiness Project: Retrospective & Lessons Learned by Christopher Liddell, Daniel Kroese and Clark Campbell. Here is the description from Amazon:


The importance of effective and well-planned presidential transitions has long been understood. The Presidential Transition Act of 1963 provided a formal recognition of this principle by providing the President-elect funding and other resources “To promote the orderly transfer of the executive power in connection with the expiration of the term of office of a President and the Inauguration of a new President.” The Act received minor amendments in the following decades, but until 2010 all support provided was entirely post-election. The Pre-Election Presidential Act of 2010 changed this by providing pre-election support to nominees of both parties. Its passing reinforced the belief that early transition planning is prudent, not presumptuous. The Romney Readiness Project was the first transition effort to operate with this enhanced pre-election focus. While Obama’s re-election prevented a Romney transition from occurring, it is hoped that the content of this book can provide a valuable insight to future transition teams of both parties.

In summary the book explains Romney's plan to reorganize the White House along the lines of the business and begin implementing new policy (rolling back Obamacare, tax reform, deregulation and increased military spending). Of course this book has spurred some commentators to imagine what a counterfactual Romney administration would have been like.

Mark Whittington at Yahoo used the book to highlight "what a Romney Administration would have been to the reality of the second term Obama Administration, careening from scandal to scandal, flailing about rudderless with no prospect for anything better for the next three or so years...The tragedy is that the American voters chose chaos over order, incompetence over sound management. Elections have consequences." Despite these strong word, Whittington did admit Romeny would have to deal with a divided Congress just as Obama has OTL.

David Gee at Staffing Talk, however, was a little critical of Romney's plan and shared an example of a client who was trying to find a successor and picked someone who was "a real my way or the highway type." The outcome wasn't pretty: "The staff basically mutinied and ran the VP and would-be CEO out, leaving the wounded company leader to begin his succession plan anew."

Again, it is still pretty early to start guessing whether a Romney presidency would be better then a second term Obama. The people who now think Obama's presidency is finished appear to have forgotten the failed predictions of an all but certain Romney victory. Let history become history, your counterfactual will be better for it. 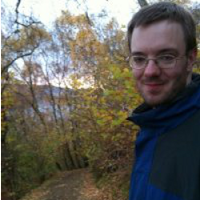 Long-time contributor and friend of The Update Chris Nuttall has been having a great week. Among other things, it was recently announced that Blanvalet Verlag/Verlagsgruppe Random House GmbH will publish the German edition of Chris' novel Bookworm in 2015.

Set in a fantasy world of magic and political intrigue, Bookworm is a dark tale of power and temptation, fear and lust, secrets and destiny. When first published in January of this year it soared up the fantasy best-selling charts on Amazon in the US, UK and Germany, with significant sales across 12 different countries in both ebook and print editions.

This deal marks a significant milestone for Chris and for Elsewhen Press. Chris began self- publishing his novels in 2011. He also submitted his historical fantasy novel The Royal Sorceress to Elsewhen Press, beginning a successful relationship. Bookworm was the second of his fantasy novels to be published by Elsewhen Press. In July, Elsewhen Press will publish their next Chris Nuttall title, Sufficiently Advanced Technology, while August will see the release of The Great Game, the much- anticipated sequel to The Royal Sorceress. The acquisition by Blanvalet of rights for the German language edition of Bookworm serves to underline the quality and appeal of Chris’s writing to a global audience.

On top of this great news, Chris also started blogging at Amazing Stories. He is going to be doing a series of book reviews for the relaunched magazine and you can check out his first one on Allies and Aliens
by Roger Macbride Allen. I look forward to working with Chris at Amazing Stories. Chris has been a popular contributor here at The Update and I am confident the Amazing Stories audience will welcome him.

Issue 49 of the 2013 Hugo Award-nominated Apex Magazine has been released and it has some good stuff for alternate historians. Among other authors, we get new fiction from well-known alternate history authors Lavie Tidhar (Osama) and and Cherie Priest (Boneshaker). Priest also did an interview with Apex that you can check out.

The issue is free to read in its entirety at the Apex Magazine website., but formatted eBook editions are available at Apex Digital, Amazon, Nook, Weightless and other.

By the way, all of you aspiring authors out there should know that Apex Magazine is currently open for submissions.

5 Conspiracy Theories That Are Shockingly Easy to Debunk by Douglas A. McDonnell and M. Asher Cantrell at Cracked.
11 Jaw-dropping Weapons From World War II You Probably Never Heard Of by George Dvorsky at io9.
Alternate history: Imagine if the Raiders had traded up for Colin Kaepernick? by David Fucillo at SB Nation.
Beyond the Tracks: The Locomotive in Science Fiction Literature by Jason Heller at Clarkesworld Magazine.
Britain and the euro: what if we'd joined? by Larry Elliott at The Guardian.
Coming Soon: “Writing Fantasy & Science Fiction” by Orson Scott Card, Philip Athans and Jay Lake at SF Signal.
Counterfactualism in Monuments by Gavriel D. Rosenfeld at The Counterfactual History Review.
D is for DIVERGENCE POINT (part 2) by Guy Saville.
Fairy Tales and Steampunk: The Perfect Combination? By Ella Grey at Steamed!
'Falling Skies' showrunner's debut novel to take place on steampunk Pangea by Emily Rome at EW.
Gideon Smith short stories announcement by David Barnett at Postcards from the Hinterland.
Guest Post (& Giveaway): Clifford Beal, author of Gideon’s Angel at My Bookish Ways.
Have Tech, Will Travel: Big List of Tech-Based Time Travel Romances by Heather Massey at Heroes and Heartbreakers.
How to read Lovecraft: A practical beginner’s guide by Matt Cardin at The Teeming Brain.
HP Lovecraft: the writer out of time by David Barnett at The Guardian.
I've been awarded the Liebster Blog award by Alison Morton.
Ohio State football: What if? by Ted Glover at SB Nation.
On the Rhetorical Power of Counterfactuals by Gavriel D. Rosenfeld at The Counterfactual History Review.
Recent Novels That Use Time Travel to Great Effect by John DeNardo at Kirkus.
RFK: What we lost, what we learned by Jeff Greenfield at Yahoo!
Romulus Buckle, Steampunk and the Female Swashbuckler by Richard Ellis Preston, Jr. at The Qwillery.
Story behind Ha'Penny by Jo Walton at Upcoming4me
TRAVELS OF DANGER IN THE YUCATAN: A Mayan Time Travel Odyssey a Novel by Hunter Liguore (Excerpt) at Amazing Stories.

The Man in the High Castle by Philip K. Dick at Dieselpunk.
The Watcher in the Shadows by Chris Moriarty at Random Musings of a Bibliophile.