Around the time my interest in alternate history was turning into an obsession, my Dad was kind enough to give me his hardcover edition of Fatherland. He did so, however, on one condition: I wouldn't read it in public with the book jacket on. When I ask he why he pointed out the swastika on the cover might offend some people.

Regardless of the symbol's origin, their is no denying that in Western society it is seen as a symbol of hate and violence. With Axis victory scenarios being one of the most written about topics for English-speaking alternate historians, the image appears often in the media supplementing our works. Authors and creators have used different methods when presenting the symbol to their audience. Some expressly present it to the world, while others find creative means to obscure it. Still others just censor it entirely.

Who is right and who is wrong? Should people just suck it up and accept that due to the context of how the symbol appears it is not meant to offend or is there just too much history tied up with it that content producers should use other means to promote their works? Yes I understand the concept of free speech (and as an attorney I probably understand it better than most people) but for the sake of discussion, what are your thoughts on the matter? How many swastikas is too many? I would be interested in reading your thoughts.

This book got some good press last week. For those who don't know, here is the description from Amazon:


He came back to kill a tyrant. He found the Devil instead. An amazing historical novel with a supernatural twist set after the English Civil War. This is the stunning debut from Clifford Beal.

He came back to kill a tyrant. He found the Devil instead.

Falcata Times said the novel "brings the wonders of historical fiction blending it with some cracking Urban Fantasy as the characters within have to deal with not only the superstitions of their own time but also with the wonderful twists that the modern writer can bring to the fore." Meanwhile, David Langford at The Telegraph listed Gideon's Angel as one of the best recent science fiction and described it as "[s]washbuckling excitement in grimy 1653."

If you guys liked Alison's "INCEPTIO – An Alternate View", I have a couple of other articles you should check out. First there is Look out, world, here comes INCEPTIO! by Alison. Here she shares photos from the Inceptio launch day event: 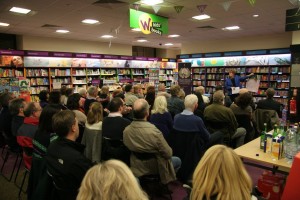 Congrats Alison, remind me to pick your brain about marketing when I publish my first novel. Alison also received a very nice shout out from the Pembury Village News, a periodical she once edited for nine years. I hope to learn more about that, her novel and other things when I interview Alison. Stay tuned.

Got some new trailers and images from the upcoming alternate history shooter: Bioshock Infinite. Enjoy:

Of course if writing is more your game check out Behind Bioshock Infinite: Ken Levine on Writing a Groundbreaking Game by Kevin Ohannessian at Co.Create. 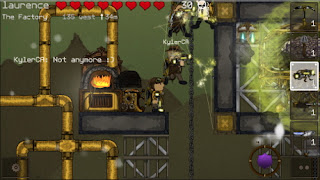 Bytebin, an independent MMO game studio, has announced the launch of Deepworld on iPhone and iPod Touch. Originally released for Mac OSX and iPad, Deepworld has now expanded to all iOS platforms. The iPhone version connects mobile players to a shared online universe already bustling with iPad and Mac users, bringing the same great MMO experience to a new level of portability and accessibility . Deepworld is available for free on the iTunes App Store.

Deepworld is a massively multiplayer 2D crafting game set in a post-apocalyptic steampunk wasteland. Players can venture through mountains and ruined cities, delve into mazelike caves and underground bunkers, and scour for resources while fending off harrowing creatures of the deep. With a robust crafting and inventory system, Deepworld allows players to create hundreds of tools, building materials, decorations, and mechanical contraptions. Players can collaborate and trade with each other in thriving user-created cities and settlements—or they can settle in their own private worlds, available as in-app purchases. Deepworld’s persistent online universe allows players to jump into the game at any time, from any compatible device with an Internet connection, and continue playing from where they left off.

“ Deepworld is an adventure, but it’s also a growing community of friends, teammates and rivals,” said Bytebin developer Quinn Stephens. “Now that players can connect on virtually any iOS device or Mac desktop, it makes the game more accessible for veterans and newcomers alike. We’re excited to welcome a new and wider audience into the game, and to continue to introduce fresh content to the fans who’ve already found a home here.”

In Deepworld, players can:

Explore: Delve into the depths of a constantly changing and expanding world and dig for precious resources, using touch controls specially refined for the iPhone.

Create: Return the world to its former glory using hundreds of items and materials, all via a simple one-touch crafting system.

Fight: Use crafted weapons to fend off mutant creatures, or construct defenses to protect valuable creations. Battle other players for supremacy in deadly PvP arenas.

Collaborate: Meet and join fellow adventurers while exploring the wasteland. Form guilds, trade resources and rare items, and band together to take down the most dangerous foes.

Customize: Alter in-game appearance at will. Gather clothing, hats, masks, and other special customizations from the environment. Earn skill points through achievements, and use them to level up abilities—including mining, crafting, agility, and more. 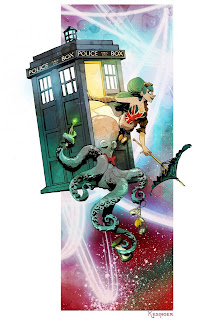 "Things to do" is just too clunky and sometimes I don't get enough submissions to warrant a specific segment on a Weekly Update. So I have combined the two in a Calender. For now I will list upcoming events, submission deadlines and kickstarters here. I hope you all enjoy the new format.

March 26: “What if the Confederacy won the Civil War” program by Layland Museum at Hill College in Waxahachie, TX.

April 6: Deadline for the The Artifice Club, A Steampunk Arts Coalition and More kickstarter (although to be fair they are fully funded).

August 22-25: NecronomiCon in Providence, Rhode Island. (Cthulhu, I really want to go to this. Anyone want to pay for my plane ticket?)

Crossroads: The Western Hero in Speculative Fiction by Chris Gerwel at Amazing Stories.

Folklore in The Charge @SharonBayliss at The Peasants Revolt.

This Glassy Tower Could Have Risen by the High Line by Hana Alberts at Curbed.

Pet Peeves of a Steampunk Editor by Mandy Brown at Steamed!

“Pimp My Airship” – Reclaiming Airships for Epic Fantasy by Anna Gregson at Orbit.

The Afrika Reich by Guy Saville at Seattle PI.

Her Majesty’s Wizard by Christopher Stasheff at Amazing Stories.

The Janis Affair by Pip Ballantine & Tee Morris at books!

The Tears of the Sun by SM Stirling at Wordsmithonia.

Exclusive First Look at the Cover for Chronos Commandos #2 From Titan Comics at Geek Syndicate.

Feature Trailer for “After Earth” Arrives by John DeNardo at SF Signal.

Mathis Landwehr Brings The Steampunk Martial Arts With LAND OF GIANTS by Todd Brown at Twitch.

Submit Your DIY online videos to the Chronos FIlm Festival by Rhetta Akamatsu at Examiner.

Forget About Humanity. Robots Rule The Land In This Steampunk Game. by Patricia Hernandez at Kotaku.

Adam Christopher at Every Read Thing.

Elementary: Season 1, Episode 18. Déjà Vu All Over Again at Thinking about books.