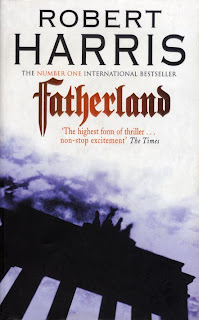 Alternate history is often thought of as a niche genre, with limited mass appeal due to the historical knowledge required to fully appreciate it, yet Robert Harris brought the genre to the forefront of mainstream attention with his 1992 novel Fatherland.

A detective novel set in an alternate post-Second World War world, where Nazi Germany emerged victorious, the novel captured the public's imagination and emerged as a best-seller in the United Kingdom. Following its release, the book was subsequently translated into thirty different languages and, at the time of writing this review, it has sold over six million copies worldwide, making it one of the most popular alternate history books of all time. Seeing as the book was written twenty years ago, fans of the alternate history genre should look for cheap book deals and get hold of what has been described as one of the great political thrillers of all time at a discount price.

Background to the Novel

Perhaps the most explored idea in the alternate history genre is the concept of an Axis victory in the Second World War and the subsequent effect that would have had on the world. It is a theme explored by Frederic Mullally in Hitler Has Won and Harris readily admits he took inspiration from several other authors who had explored this concept. As the reader progresses through the book, we find out how and where the history in Fatherland deviates from the real-life history.

In Harris' world, the Nazis pushed back the Soviet army and were able to cut them off from petroleum supplies by 1943. In 1944 their U-Boat campaign forced the British to surrender and in 1946, Nazi Germany tests its first atomic bomb and makes a demonstration of force to the United States, firing a missile above New York City in order to demonstrate the long-range capability Germany possesses.

Robert Harris expertly sets the scene of a 1960s in which the 'Greater German Reich' menacingly incorporates Alsace-Lorraine, Austria, Poland, Luxembourg, Ukraine, Belarus and much of the western Soviet Union. Berlin emerges as the biggest city in the world, with a population of over ten million people and Adolf Hitler lives well into his 70s. Meanwhile, Harris explains that Winston Churchill and Elizabeth II have been forced into living in exile in Canada.

Although the background to Harris' post-war world is firmly established, it acts as a backdrop for the plot of the novel and real-life characters like Adolf Hitler are only really mentioned by name. The main plot of the novel centers around Xavier March, a fictional detective investigating the death of Josef Buhler, a high-ranking Nazi official.

Xavier soon discovers that there is a government conspiracy designed to murder the Nazi Party officials involved in the planning of the Holocaust. In Harris' world, the Holocaust is explained away by the Nazis as the relocation of the Jewish population to an area where travel and communication methods remain poor and, despite many suspecting the realities, most of the German population are unaware of the true extent of Nazi crimes.

In the process of his investigation, Xavier March meets an American journalist, Charlotte Maguire, and together they uncover a plot by the Nazi Party to ensure their crimes remained secret ahead of an upcoming meeting between Adolf Hitler and President Kennedy, where it was expected that superpower relations would significantly improve.

March and Maguire are then faced with the task of exposing the evidence to the world, in the face of a Gestapo operation to prevent them from doing so.

Throughout Fatherland, Robert Harris forces the reader to consider the reality that a Nazi victory in the Second World War was not an impossibility and, though it was not the first nor last book to examine the concept, he is able to expertly and imaginatively paint a picture of what post-war Europe could have looked like if the Allies had failed to halt Adolf Hitler's attempt for domination.

The totalitarian society that exists in Harris' Greater German Reich is reminiscent of George Orwell's 1984, yet the standard of living for most German people in the novel is actually very high. It is a society which, largely, remains blissfully ignorant to the extent of the crimes committed by the Nazi regime and it is primarily through the investigative work of the central character, Xavier March, that the true horrors of what lies beneath the surface are explored. Harris encourages the reader to consider the possibility of an even more controlling Nazi regime, an even greater number of Jews killed during the Holocaust and a largely happy German public in a reality that seems somewhat unbelievable to us today, yet was was perhaps not a million miles away from actually occurring.
Posted by Mitro at 3:00 PM