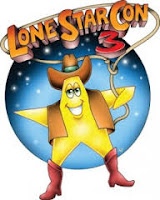 Since I highly recommend to all alternate historians to attend the presentation of the Sidewise Awards at least once, I though it was fitting to share with you some information about LoneStarCon 3, the 71st World Science Fiction Convention.

Founded in 1939, the World Science Fiction Convention ("Worldcon") is one of the largest international gatherings of authors, artists, editors, publishers and fans of science fiction and fantasy entertainment. The Sidewise Awards are presented every year at Worldcon (you can read my report from last year's presentation in Chicago) and this year they will be presented in San Antonio.

First announcement, this year's Hugo Awards and John W. Campbell Award for Best New Writer nominees will be announced on Saturday, March 30, starting at 3 p.m. CDT. The nominations announcement will be made simultaneously at four conventions in the United States and United Kingdom, with the shortlists being published through the LoneStarCon 3 website immediately afterwards.

After the announcement of the nominees, the final voting process will begin. Attending, Young Adult, Military, and Supporting members of LoneStarCon 3 will be able to cast final ballots until Wednesday, July 31, 2013, 11:59 p.m. EDT. The winners will be announced on Sunday, September 1, 2013, during the Hugo Awards Ceremony at LoneStarCon 3. For additional information, please contact hugoadmin at LoneStarCon3 dot org.

Second announcement: Membership rates for LoneStarCon 3 will increase on Wednesday, May 1, 2013.
As part of the convention's policy to encourage families and children to attend LoneStarCon 3, the following attending membership rates will remain unchanged:
The Family Rate for two adults plus two or more dependent children will be held at $520, representing an additional $40 discount for family groups. Child and Young Adult rates are based on the person's age as of Thursday, August 29, 2013. LoneStarCon 3 is also offering a military discount rate of $110.

All of these membership rates will be valid through Wednesday, July 31, 2013.

LoneStarCon 3 will be selling Day Admissions to the convention. Day Admissions are priced according to the day being purchased and the age of the purchaser. Single Day Admissions for Adults will range from $30 to $75; for Young Adults and Military, from $20 to $40; and for Children, from $10 to $25. Full details of Day Admission prices and purchase arrangements will be released during April, 2013.

Final announcement, the process to select the host sites for the 2015 Worldcon and the 2014 North American Science Fiction Convention ("NASFiC") has begun.

Three bids have been formally filed for the 2015 Worldcon, which will be the 73rd occasion of this convention. In alphabetical order, these are as follows:
Two bids have been filed for the 2014 NASFiC. This convention is held in North America in any year when the Worldcon travels outside the continent. A NASFiC will be held in 2014 since the 2014 Worldcon will take place in London, UK. In alphabetical order, the NASFiC bids are as follows:
All Adult and Young Adult Attending and Supporting members of LoneStarCon 3 are eligible to take part in the site selection process.

Ballots may be submitted by postal mail or in-person at the convention. Postal ballots must be received by August 18, 2013. Voting at the convention will continue until 6 p.m. on Saturday, August 31, 2013. All ballots must be accompanied by an Advance Membership (Voting) fee, set at $40 for the Worldcon election and $35 for the NASFiC election. In each case, the fee will automatically be converted to a Supporting Membership in the winning convention. For further information about the site selection process, write to siteselection at LoneStarCon3 dot org.

Matt Mitrovich is the founder and editor of Alternate History Weekly Update, a blogger on Amazing Stories and a volunteer editor for Alt Hist magazine. His fiction can be found at Echelon Press, Jake's Monthly and The Were-Traveler. When not writing he works as an attorney, enjoys life with his beautiful wife Alana and prepares for the inevitable zombie apocalypse. You can follow him on Facebook or Twitter.
Posted by Mitro at 1:42 PM