Review: By Force of Arms by Billy Bennett 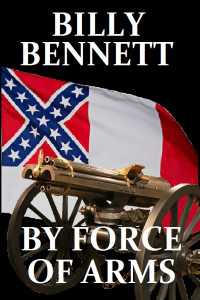 Let me confess at the outset that I do not like negatively reviewing books. As an aspiring author who has yet to finish my first novel, I always try to give the benefit of the doubt to those who have. Let me also say that By Force of Arms, Billy Bennett's sweeping history of the Second American Civil War that never was, is not an entirely a bad book. All that said, there are a couple of really glaring flaws that will, I think, probably deter a lot of readers from buying the book.

The premise of the book is actually a pretty common starting point for Confederate victory scenarios: the survival of Stonewall Jackson after the Battle of Chancellorsville, his more aggressive actions on the first day of Gettysburg, total Confederate victory in the Battle of Fredericksburg and the intervention of the European countries to push Lincoln to the negotiating table. So far its plausible, and unlike many modern alternate historians, Bennett does not over-estimate the British willingness to lend the Confederates a helping hand. While you see a lot of alternate historians (cough, Turtledove, cough) envisioning a permanent strategic alliance between Britain and the Confederacy, I think this dramatically under-estimates the anti-slavery sentiment of the British public, and over-estimates Britain's willingness to get involved in North American affairs. Britain might go so far as to urge a diplomatic resolution to the conflict to tweak the Americans' tails on the cheap and give them something close to home to worry about, but openly allying with the Confederacy to the extent of actually sending troops to North America just does not seem plausible to me, and Bennett gets this right.

As the story moves forward, we find the north ready for a fight once again in 1869, with Confederate intervention in Mexico as the pretext. I also give Bennett some points here for the way in which he integrates new technologies onto the battlefield. The Gatling gun and breech-loading rifle certainly would have revolutionized warfare, and I doubt generals on either side, whose most recent experience with warfare would have been the Civil War of 1863, would really have understood the changes these new weapons would bring. Finally, on the positive side of the book, I actually found Bennett's characters to be interesting. From Buffalo Soldiers to Confederate scientists, war corespondents to members of the French Foreign Legion, Bennett did a good job inventing credible characters out of whole cloth.

Now, to those flaws I mentioned. First and foremost, this book really, really needed a content editor.  The occasional spelling and grammar mistakes I can live with, although other readers may have a lower pain threshold in this regard. When they occur on a very regular basis, and are combined with basic copy editing mistakes, it can become distracting. For example, part of the scenario rests on the premise that pro-Confederate Ohio congressman Clement Vallandigham wins the 1864 election, and guts the Union army (we'll come back to plausibility in a moment). Yet, later in the book, McClellan is listed as the President elected in 1864. This is probably an editing mistake left over from an earlier draft, but I found it confusing, and distracting.

On the one hand, Vallandigham being elected is fairly implausible. Even when a country loses a war, it does not tend to support those who opposed it. So McClellan's election is more plausible, but less likely to yield the result the author wants. There are a lot of bad things you can say about Little Mac, and I've said most of them, but the one thing I could never see him doing is gutting his beloved Army of the Potomac, which served, not incidentally, as the base of his power in 1864. I actually think the most likely outcome of the 1864 election would be a moderate, pro-war Democrat winning, maybe Dan Sickles for example if he performed well at Gettysburg, or a less radical Republican like William Seward taking the helm.

This leads me to the second, and in my view, most major flaw with By Force of Arms. I excluded several characters from my positive description above, and that was deliberate. Like the scenario itself, I am not sure the actions of Bennett's real historical people are actually plausible, and I think this owes something to the author's pro-Confederate slant. Let me clarify this point a bit. Bennett makes a conscience effort not to sugar-coat the racism throughout Confederate society, and one certainly doesn't get the impression that he thinks a victorious Confederacy would have been a utopia. I do think, however, he sees a pro-union bias in much of the American Civil War alternate history out there, and in trying to balance this, over-corrects. As a result, major portions of the book just don't pass the plausibility test for me.

I recognize this is sort of a hard line to draw with alternate history, and I also confess I'm a good bit more sympathetic to the Union than the Confederacy, and certainly more sympathetic to it than the author, so this may color my judgment. Nevertheless, it seems to me that all the major Union politicians and generals make horrible decisions which also happen to be out of character. Let's begin with the first union actor which does things that make no sense: the general electorate. Certainly, I can understand the desire to pick a war hero after the humiliation of defeat and, equally importantly, the economic and political weakness of the Vallandigham administration. Picking William T. Sherman, however, seems to have more to do with the author's desire to portray the U.S. President as a cartoon villain, complete with conspiratorial meetings with New York financiers and broad expansions of executive power. There are a host of staunchly anti-Confederate figures who would have made sense as victors in the 1868 election: Thaddeus Stephens, Charles Sumner, or generals such as John C. Fremont. However, the idea of a subordinate commander in the western theater who, as of 1863, hadn't earned the controversial notoriety he did during the 1864 campaign, steam-rolling his way into the White House is a little far-fetched.

This pales in comparison to the other bad decisions Union characters make in this book, seemingly without reason. Take the most egregious example: U.S. Grant, who is quite logically put in charge of the whole war effort, decides to concentrate the entire Union army into one massive hammer attacking Virginia. Sure, Grant believed in Union victory by attrition, and took personal command of the OTL force in the east. I could certainly see him doing something similar in a second Civil War scenario. However, the idea that he would simply allow the Confederates a free shot at California and basically ignore the  the western theater—where he spent the vast majority of his  military career including his service in the Civil War, is a little hard to swallow.

In addition to the often baffling decisions of Union generals, the Confederates never make any mistakes. Bennett doesn't account for "victory disease", the well-established phenomenon that winning armies often get over-confident and over-extended. Additionally, it tends to be the case that armies which lose wars have a better record of rapidly adopting innovations than armies that win. Add all this to the very traditional military culture of southern officers at the time, and it seems to me the Confederates adapt too quickly, and adopt new technologies far too readily, while the Union generals talk about lessons from the last war, but command with about the level of competence they showed in 1862.

On the whole, then, I thought the premise of By Force of Arms was interesting and decently plausible, the characters were good and the description of changes in warfare was well thought-out. For me, though, the book was just too badly-edited and unabashedly pro-Confederate. A more balanced perspective with the editing problems of this book, or a pro-Confederate narrative without some of the serious editing issues, would have probably gotten a better review. As it is, I think if a dash of "lost cause" fiction is your thing, you might be able to overlook some of the editing and content issues. Mr. Bennett is an author who shows some promise at imagining alternate impacts to alternate history scenarios. Unlike the Union army of his books, I hope his next offering will be able to overcome some of the weaknesses of this book.