In honor of Balkanized North America month and a new book I am about to read, I decided to do a multiverse profile on one of the more common nations found in BNA TLs: Texas.  Settled originally by the Spanish until Mexico assumed control of the territory until 1836 when Texas won its independence, becoming an independent Republic. In 1845 it joined the United States as the 28th state.  Texas is nicknamed the Lone Star State to signify Texas as an independent republic and as a reminder of the state's struggle for independence from Mexico. The "Lone Star" can be found on the Texas state flag and on the Texas state seal today.

Perhaps this is one of the reasons why Texas has had such a long history of rebellion in the United States.  A slave state, Texas declared its secession from the United States in early 1861, joining the Confederate States of America during the American Civil War.  Though Texas eventually returned to the Union after the war ended, the calls for secession were never silenced.  Proponents of the idea include fringe organizations like the Republic of Texas and former Republican presidential candidate and current governor of Texas, Rick Perry. In April 2009, Perry raised the issue of secession in disputed comments during a speech at a Tea Party protest saying "Texas is a unique place. When we came into the union in 1845, one of the issues was that we would be able to leave if we decided to do that...My hope is that America and Washington in particular pays attention. We've got a great union. There's absolutely no reason to dissolve it. But if Washington continues to thumb their nose at the American people, who knows what may come of that."  Of course, Texans have a lot of odd ideas about their rights as a state.

So with that in mind, it is easy to see how Texas provides fertile ground for the imagination of an alternate historian.  Ignoring the Confederated State of Texas (except for those that eventually secede from the Confederacy, like the Texas in Harry Turtledove's Timeline 191 series), alternate history is full of independent Texas nations.  Roswell, Texas by L. Neil Smith and Rex F. May features a timeline where Davy Crockett survived the Alamo and Santa Anna did not.  Texas would eventually become the libertarian "Federated States of Texas" rather than becoming a part of the United States.  Other independent Texas nations include the one found in the short story "Soy la Libertad!" by Robert Coulson and Captain Confederacy by Will Shetterly and Vince Stone.  In the later, the United States balkanized following the American Civil War.  The creators were kind enough to share a map of the former United States on their blog: 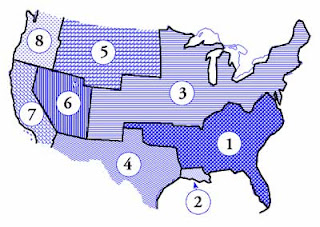 So what would happen if Texas seceded again, like it did in the Family Guy episode "Back to the Pilot"?  To answer that questions, perhaps I only have to read the The End of Texas by Juan Batista.  Here is the plot summary:

The End of Texas is a work of alternate history showing how one governor's treason could have led to a secession movement countered by a movement of loyal patriots, ending in a shattered state. Militias launch more campaigns of assassination and bombings. Loyal Americans rise up against secession. Loyal patriots in the state, Mexican-Americans, Blacks, progressives, moderates, and non-treasonous conservatives struggle to keep much of Texas in the USA, and break away from Texas to form their own states.

A book for anyone asking the question, "How can anyone claiming to be a loyal American favor secession and treason, and what can true patriots do to stop them?"

The End of Texas is also a thorough debunking of the John Wayne image of Texas, an incisive look at the real Texas, stripped of myths. The book is a salute by a lifelong Texan to the best parts of the state. Texas, far from being a land of rednecks or rigidly fundamentalist conservative Christians, also is diverse and modernizing land, a state with one third of its people Latino, with one of the highest Muslim populations in the nation, and even a lesbian mayor of Houston. Texas is a state where one can find kosher chili and leftwing country music. It is that part of the state that must win out over its redneck past.

And for those who like maps, here is what Texas will come to look like in the story: 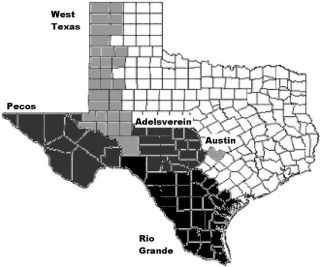 So stay on the lookout for my review of The End of Texas and stay tuned for the next multiverse profile on an imaginary North American nation: New England!

Mitro is founder, editor and contributor of Alternate History Weekly Update. When he is not busy writing about his passion for alternate history, he spends his time working as a licensed attorney in the state of Illinois and dreams of being a published author himself one day.﻿
Posted by Mitro at 11:00 AM