Meet a Sidewinder #1: Texan in the Sea of Time

As promised here is my first (and hopefully not only) installment of "Meet a Sidewinder".  In these segments I discuss people from alternate histories we find in our own timeline, who I call Sidewinders after Ken MacLeod Sidewise Award nominated short story "Sidewinders", which can be found in The Mammoth Book of Alternate Histories. 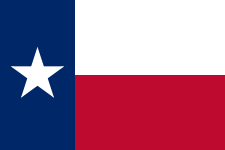 Spend enough time around the Internet and you will discover some lost souls who believes that the flag of the state of Texas is the only state flag that can fly at the same height as the United States flag.  They claim it is because they were an independent nation before joining the United States or because they negotiated this right before they were annexed.  This is an intriguing idea, especially since their is almost no evidence in our history to support this claim.

Consider the United States Flag Code, which became the law of the country in 1923, which states that any state flag could be flown at the same height as the United States flag just as long as the United States flag is flown to the right (the viewer's left).  Want more evidence?  Nothing in the Ordinance of Annexation or the Texas Flag Code supports the claims above.  Now I know what you are saying: "Mitro stop using those fancy, elitist words to prove your point!"  I am sorry, I will make this easier for you:


So why do these people continue to claim that the flag of Texas is so special?  Are they misguided Texan separatists?  Do they put to much trust into PBS?  Are they just trolls attempting to incite some digital anger?  Are they just historically illiterate and too proud to admit they are wrong?

Or...are they from another timeline?!?!  They are just like the Sidewinders from MacLeod's story, unable to control their insertion into alternate universes.

This can be the only logical reason for believing the flag of Texas is the only state flag to have the ability to fly at the same height as the United States flag.  I certainly cannot think of another reason why a sane and normal individual would continue to stand by his ignorance in the face of this overwhelming evidence.  Now the important question is what was the point of divergence for their timeline (or timelines since there seems to be some disagreement among the adherents of Texan specialness).

It probably is not simple enough to say that the point of divergence was sometime in the 1840s.  It is unlikely that the OTL United States of the 1840s would allow a single state to claim such a special status over the other states.  For this to be plausible, the point of divergence would have to happen much early then the annexation of Texas.  In fact, I believe that the timeline(s) these Sidewinders came from was one where the states' rights adherents of pre-Civil War politics were much more successful.

How could the states' righters have done this, however, with the Constitution being the way it was?  What point of divergence would allow this odd world?  Here are some possible points of divergence:
Sadly I was unable to find any of these Sidewinders for interview.  Likely they found there way back to their own reality before they had to deal with the shock of their predicament.  It is a shame because I would have loved to learn from them what their world actually looks like...
﻿﻿
﻿﻿
Posted by Mitro at 10:00 AM