Alternate designs for famous flags are a staple of Flag Friday and today is no exception. So without further ado, what if the United States flag was made to resemble the flag of Spain: 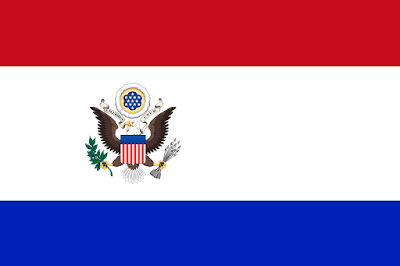 This is the "Spain-ized USA Flag" by 3tmp. As you can see the flag has three horizontal bands of red (top), white (double width) and blue, with the national coat of arms on the hoist side of the white band, much like the current flag of Spain. Although as of late I've come to find flags that just slap on their coat of arms to be kind of lazily designed, I still enjoy the look of it. It is such an easy template to use that almost any flag could be redesigned to look like the flag of Spain.

That said, I have no idea if there is a timeline where a flag like this would arise. Maybe America has a second Civil War that leads to a Francoist style government arising in the 20th Century. Maybe Spain has nothing to do with this flag and instead a New Netherlands still exists and united with the English-speaking colonies to form a very different union that actually based their flag design off the Dutch flag. Or maybe this is what Crimea looks like if it was colonized by Americans. (Thanks for the commentators in Reddit for the ideas.) Where do you think this flag comes from?

Honorable mention this week goes out to "Communist Columbia" by gruff.jones.