Weekly Update #236! Thoughts on the Orlando Shooting (and more) 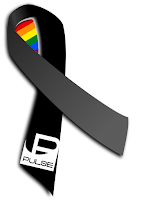 My apologies for the long Editor's Note. I find myself writing this on the day I awoke to learn about the shooting in Orlando, FL and its hard to talk about the blog, my projects or alternate history in general.

First, my prayers for the survivors of the shooting that they may recover from the physical and emotional trauma they suffered with as little pain as possible. Second, and most importantly, my sympathies for lovers, families and friends who lost someone. We all share the pain of loss, it is something that unites us as humans. I know the pain you are feeling is terrible now, but stay strong.

In times like these, being an alternate historian gives you a unique perspective on the aftermath of these deadly shootings. Already the police and press are gathering evidence about the motivation of the shooter...and it really won't matter to many people out there what they really are. Consider the shooting of a black church in South Carolina. Despite mountains of evidence that the shooter was a racist, how many people claimed he did it solely because he was anti-Christian? Then there is the Isla Vista shooting? In that shooting some saw a man with severe mental illness, while others just blamed women for causing someone to go crazy just because they should have had sex with him. Or how about Columbine? How many "experts" and politicians claimed the primary reason for the shootings were violent video games?

The reasons for events like these are often manipulated and twisted to fit a personal narrative so someone's cause can be advanced. Was the shooter motivated by radical Islam or was he mentally ill? Was the shooting caused by the divisive opinions of a certain political candidate or is this a symptom of America's gun problem? Perhaps all of those causes are correct or perhaps none are, but it doesn't matter. People unintentionally alter history to fit what they feel is correct, relying on emotions and beliefs, instead of facts. Eventually our timeline will conform to one of these positions and the forgotten arguments will only ever be revisited again by future alternate historians.

The two important thing to remember in this situation is to a) not allow our emotions to dictate our actions and b) remember we are better then those who resort to violence. Lets help the victims, lets take reasonable measures to prevent this from happening again, lets protect those minorities who are often convenient punching bags and lets have civil discussions about this event. I'm sure there are already people being banned right now on AlternateHistory.com or elsewhere on the Internet because of their opinion...but its pales in comparison to the victims of the shooting and those being punished by someone for this. Its important for us to have hope that the future will be better and to not give into our violent nature.

Us alternate historians know enough about history to know that relatively speaking, the present is much better then the past. To paraphrase a famous song, things are getting better all the time. We need to maintain the courage to stay the course and not slip back into a darker era. Lets not let the people who died come to regret the world that was taken from them. 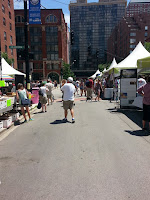 Last weekend Alana and I attended the 2016 Printer's Row Lit Fest. Its annual outdoor literary festival held every year in the Printer's Row neighborhood of Chicago. Alana and I have been attending it ever since I started publishing stories and we enjoy every minute. Admittedly this year was a hot one and we spent a lot of it indoors, but we still had time to go book shopping and meet up with a few friends. I even posted a short video of our adventure on my channel.

As part of our haul, I purchased copies of Wasteland of Flint by Thomas Harlan (which is set in a future dominated by the Japanese and Aztec empires) and Resistance by Owen Sheers (where the Germans capture Moscow and later invade Britain after D-Days fails...although I'm not sure why there would be a D-Day in the first place if Moscow had already fallen, but I guess I will find out why later). Hopefully I will read and review both in the future.

Now begins the long wait until the next Printer's Row.

Have you guys head of Atomic Robo? If not, you may want to check out Linkara's review of volume 3:


Also let me take this moment to say that the YouTube search engine that Blogger provides is awful. Just awful. It never finds the video I'm looking for. I put the specific title of the above video in quotations into the search engine and the first (and only result) was a Mr. T comic that Linkara reviewed last month. Blogger, I can't express how much you failed when it comes to this feature.

As for my channel, check out my response to your questions for my 1000 subscriber Q&A:
Sorry for all of the long-winded rants. I tend to do that a lot according to Alana. My next video will be a review of another famous alternate history map, but until then, maybe you should check out Shark Jumping's exploration of television shows that never were.