Map Monday: Jewel of the Nordic Empire by Lynn "ToixStory" Davis and AshleeNova

It was hard to pick what map to feature today. There were some really good maps posted last week, but the one you see below gave me a lot to talk about, so I decided to go with it: 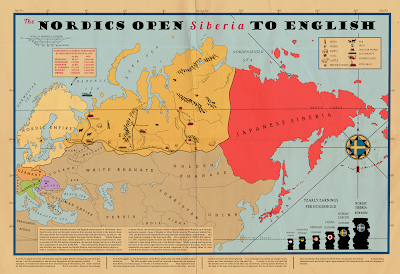 That is "Jewel of the Nordic Empire" and it is unique for many reasons. First, it is actually a collaboration between Map Monday alum Lynn "ToixStory" Davis and newcomer AshleeNova, which is actually pretty rare for this blog. Second, this map was created for Krall's Map of the Fortnight contest on Althistoria.proboards.com (a new alternate history forum). These contests were originally hosted on AlternateHistory.com by Krall, but he took him to his new site recently. So this map has some interesting behind the scenes details that caught my eye.

To sum up the story: the Kalmar Union (later Nordic Empire) expanded eastward while the Russian states fought with the Mongols eventually creating one of the largest land empires in the world. Despite its size, the Nordic Empire has a rather small population and is now trying to encourage settlers from England. This map acts as a piece of propaganda by showing all of the wealth awaiting for any of the families willing to move permanently to Northern Eurasia, which I found to be a nice touch.

The map itself is well done with easy on the eyes colors and fold lines that give the idea that this is a scan of the actual handout from this timeline. Admittedly the text that accompanies the map has weird extra-long spaces after the periods. You can even see them from the small size of the map I use for this article, but you can get a better look at them from the full sized version here. In the end I am just nitpicking because I do like "Jewel of the Nordic Empire".

Honorable mentions this week goes out to "Alternate History North America" by Keperry, "Strength Through Unity" by Rvbomally, "2000 AA (after Ascension)" by Pischinovski and "The Reluctant Railroad" by Rebecca "Upvoteanthology" Stirling. If you want more map goodness check this scenario that imagines the collapse of Russia and this map featuring Soviet WWIII plans.