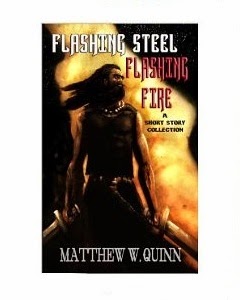 Friend of The Update Matthew Quinn has a new short story collection out, Flashing Steel, featuring many of his alternate history short fiction. See the description from Amazon below:

The vivid imagination of Matthew W. Quinn has carried him far from our mundane world to places of mystery, wonder, and terror. Now is your chance to join him on ten adventures ranging from Dark Age Denmark to a world where North America and Europe face off against the Indian Ocean in a Cold War to the forgotten and frightening corners of our own present day...

COIL GUN-On the opening night of the Third World War, an American spaceport official plays off against an Afrikaner intelligence officer with the fate of the world in the balance. Previously published in PRESSURE SUITE: DIGITAL SCIENCE FICTION #4.

LORD GIOVANNI'S DAUGHTER-A scholar and adventurer must rescue his employer's daughter from the fierce Talassos, prince of the serpentine Naga.

NICOR-A teenage Dane on his first Viking raid encounters something fiercer than the Anglish. Previously published in HEROIC FANTASY QUARTERLY.

MELON HEADS-A pair of young lovers in Ohio discover what they thought an urban legend is very, very real...

PICKING UP PLANS IN PALMA-An American spy infiltrates the brutal Afrikaner Confederation to retrieve vital plans, not knowing the terrible fate awaiting him...

THE BEAST OF THE BOSPORUS-After the destruction of the Ottoman fleet at the Battle of Lepanto, Grand Vizier Sokollu Mehmed Pasha seeks power of a different sort, power that puts him at the mercy of powers beyond human comprehension.

I AM THE WENDIGO-Many tales have been told about the wendigo, the man-eating fiend of the northern woods, but when has the wendigo ever spoken for himself? Previously published in CHIMAERA SERIALS.

LORD OF THE DOLOROUS TOWER-In a world wracked once by a celestial impact and then again by a fierce Dark Lord, two adventurous teens go treasure-hunting in the Dark Lord's tomb...

WESTERNMOST THRONE-On the eve of the U.S. Presidential Election, a campaign receptionist finds out her boss is much more than he says he is...

Frequent guest reviewer Kieran Colfer will be reviewing the collection so expect to see his review in the near future.