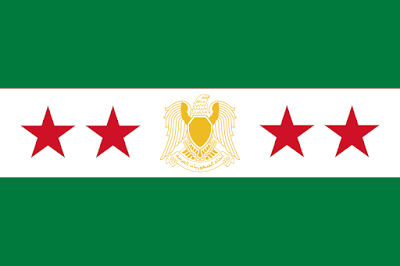 The United Arab Republic formed in 1958 with a political union between Egypt and Syria. It was an early attempt to create a more powerful Arab political entity. It was counter-balanced by the Arab Federation of Iraq and Jordan. Yemen quickly joined in with Egypt and Syria adding to the Union. The United Arab Republic barely survived the aftermath of the Nine-Day War in 1967. By 1970 Muammar Gaddafi had Libya join the floundering organization. It was renamed the Union of Arab Republics (اتحاد الجمهوريات العربية).

This is the flag of the Union from 1970 until the mid-1980s when the they grew again picking up the pieces left after the Iran-Iraq War.