For the inaugural Timeline Thursday I would like to go a little old school and recommend The Drowned Baby Timeline by Johnny Pez. To give you an idea of what we are working with, check out this map below: 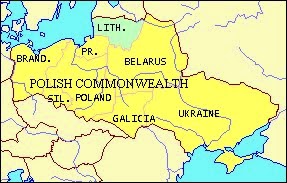 That is a map of the Polish Commonwealth in 1945. You see in this world, a certain well-known Austrian drowns as a baby. History carries on as usual until Ernst Röhm launches a right wing coup of Germany. Unable to maintain his hold, he opts for a quick, victorious war against Poland in 1936. Unprepared for war, the Germans are eventually driven back outside the gates of Warsaw (by a cavalry charge no less). Germany is defeated and is divided between Britain, France and Poland.

Poland, surprisingly, annexes their portion of Eastern Germany and reforms itself into a multi-ethnic federation called the Polish Commonwealth. The Commonwealth is tested in 1944 when they go to war with the Soviet Union over Lithuania and things go well for them thanks to the help of German scientists and generals fighting for the Poles. The post-war Poland enjoys a cultural renaissance and finds itself an important player in global affairs.

The Drowned Baby Timeline is one of the first timelines I remember reading when I discovered the Internet's alternate history community. Original posted on Soc.history.what-if, the timeline uses the Great Man Theory by arguing the right person (or the wrong person in this case) can have an impact on history. Although there are many serious subjects throughout the timeline (from civil rights, genocide, nuclear weapons, etc.) the series has a humorous tone. It is full of historical in-jokes and pop culture references ranging from the Lone Ranger to Casablanca. It was also amusing to read about Eric Blair argue against the Great Man Theory of History, but he is just one of many historical VIPs to make an appearance in this timeline.

You can check out the complete The Drowned Baby Timeline at Johnny Pez's blog where he also posts updates to the Sobel Wiki. If there are any other timelines you would like me to check out and recommend, contact me at ahwupdate at gmail dot com.