Quick announcement: I am going to be on vacation all next week. This means I will not be posting on The Update. Sorry guys but I am taking a vacation from The Update as well as my day job. Hopefully you can survive for a week without any speculative goodness.

Frankenstein's Monster is Coming for You!

Mary Shelley's mad scientist and gothic monster have returned to the spotlight last week. They have been featured in a variety of projects, the first being Frankenstein’s Army. This low-budget horror film features zombies brought back to life Frankenstein style during WWII. Check out the trailer below:
And here is the description from Geek Syndicate:


In the waning days of World War II, a battalion of Russian soldiers find themselves lost in enemy territory. Stumbling upon a village decimated by an unseen terror, they discover that a mad scientist (Hellboy’s Karel Roden) conducts experiments to fuse flesh and steel, creating an unstoppable army of undead soldiers. Leaderless and faced with dissention amongst their dwindling ranks, they must find the courage to face down an altogether new menace – or die trying.

Sounds interesting, but if WWII isn't you favorite era of history, there are other periods of time you can find the Modern Prometheus. You might be interested to learn that the posters for the upcoming film I, Frankenstein have been released at Comic-Con. Based on the graphic novel, Frankenstein's monster, named Adam and having taken the surname of his creator, becomes involved in a war between gargoyles and demons in an ancient city. I'm not sure how I feel about this. Sounds too much like Van Helsing, but even that film still managed to make twice its budget so people will still likely see this as well.

You might also be interested in learning about Frankenstein's Monster, a "steampunk-light" adaptation of the classic novel. Judith B. Shields, the founder of First Step Cinmeatics and the writer and producer of Frankenstein’s Monster, is interviewed over at Steamed! where she discusses the film.

So on the last Weekly Update, I talked about how Fox is trying again to relaunch League of Extraordinary Gentlemen, but this time on the small screen. Well there have been more responses from this announcement. David Christopher Bell on Cracked called the original film "a bastardized adaptation of an Alan Moore comic, [that] sucked so much that it singlehandedly convinced Sean Connery to retire from acting" and after pointing out the writer from Green Lantern is writing and producing this new series he asked "[c]an't we just go ahead and cancel the Fox version now?"

And of course, someone was going to have to get Alan Moore's reaction to this announcement. Entertainment Weekly got a hold of him and asked about his opinion of the TV series. Here is a taste:


When [DC Comics] did the recent Watchmen prequel comics I said all of sorts of deeply offensive things about the modern entertainment industry clearly having no ideas of its own and having to go through dust bins and spittoons in the dead of night to recycle things. The announcement that there is a League of Extraordinary Gentlemen television series hasn’t caused me to drastically alter my opinions. Now it seems they are recycling things that have already proven not to work.

While it is not an unexpected reaction from the famous comic writer, it still sums up what a lot genre fans think about modern Hollywood. O well, hopefully Penny Dreadful will be good.

You can’t conquer the globe without crossing a few oceans, but Europa Universalis IV is ready to help you shape up before you ship out. Paradox delivered an inside look at the possibilities of exploration, colonization, and naval domination in their upcoming empire-building strategy game, Europa Universalis IV. Check out their recently released developer diary:
The age of exploration is a crucial turning point in world history, but what if things had gone a little differently? Some possible alternate history that can occur in Europa Universalis IV are discussed by Project Lead Thomas Johansson of Paradox Development Studio, providing players with a preview of the troubles faced by an expanding nation. The promise of new riches and resources may lure your empire overseas, but what happens when your colonists start getting ideas about your relationship? What will you do when religious dissidents start fleeing their homeland and populating your new holdings… and who are these upstarts claiming to be “founding fathers?” Can you crush their notions of independence, or will the colonies rise up and outshine your empire?

Strategy fans can prepare for the long road to conquest by pre-ordering Europa Universalis IV. Pre-orders come with several pieces of bonus DLC, including the newly revealed Purple Phoenix pack, and further items to be revealed in August. Europa Universalis IV will be released worldwide on August 13, 2013. 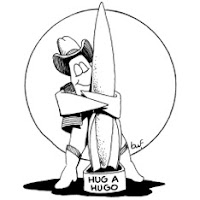 LoneStarCon 3 would like to remind members that the voting deadline for the 2013 Hugo Awards and John W. Campbell Award is Wednesday, July 31, 2013, at 11:59 p.m. CDT. The same deadline applies for access to the 2013 Hugo Voter Packet, which can currently be downloaded via the LoneStarCon 3 website.

Members can submit their Hugo Award ballots online via the LoneStarCon 3 website or by postal mail. Postal ballots must be received before the voting deadline. Members wishing to vote online will need their unique LoneStarCon 3 PIN. Email PIN reminders will shortly be emailed to all members who have provided their email addresses to the convention.

The Hugo Voter Packet is an electronic package of nominated works graciously made available to voters by both nominees and their publishers. This year's packet includes a wide range of fiction and nonfiction writing as well as professional and fan artwork and fan audiocasts.

8 cool things George R.R. Martin's doing when not writing the next Thrones by Carol Pinchefsky at Blastr.
11 EXHAUSTED SF TROPES YOU SHOULD AVOID. REALLY.
11 Exhausted SF Tropes You Should Avoid. Really. by Carrie Cuinn.
A horde of the undead is about to sweep over Europe. The Devil's Harvest by @ScottWhitmore at the Masquerade Crew.
Series Spotlight: George Mann’s “Newbury and Hobbes” Series by John DeNardo at SF Signal.
Zombies and the Wild West: Author looks to public to help fund novel by Erik Chalhoub at Register-Pajaronian.

5 Gigantic Wars You Won't Believe Almost Happened by Jacopo della Quercia and Edward Chusid at Cracked.
MMA Alternate History: What if the WWE Purchased the UFC in 2001 Instead of Zuffa? by Matt Saccaro at Cage Potato.
The report that could have made our world an alternate timeline by Esther Inglis-Arkell at io9.
What if David Peterson hadn't called an early election? by Stephen Skyvington at The Whig.

How to Watch Rite of Passage and other Steampunk and Steamfunk Movies by Balogun at Chronicles of Harriet.
Producer Kendrick Wallace Launches a $15,000 Indiegogo Campaign Seeking Development Funding for “The Amazing Adventures of Victoria Clarke" at VSM.

Conquering Westeros in CRUSADER KINGS II by Adam Whitehead at The Wertzone.
Unnamed 101 is a Steampunk themed Action-RPG that is looking for funding on Kickstarter by AndrewH at Droid Gamers.

Podcast about counter-factual history by Stefan Sasse at The Nerdstream Era.