So ends the first chapter of this brilliantly readable counterfactual novel, reminding us that America’s Christian fundamentalists have been consistently clear about their vision for a "Christian Nation" and dead serious about acquiring the political power to achieve it. When President McCain dies and Sarah Palin becomes president, the reader, along with the nation, stumbles down a terrifyingly credible path toward theocracy, realizing too late that the Christian right meant precisely what it said.

In the spirit of Philip Roth’s The Plot Against America, one of America’s foremost lawyers lays out in chilling detail what such a future might look like: constitutional protections dismantled; all aspects of life dominated by an authoritarian law called “The Blessing,” enforced by a totally integrated digital world known as the "Purity Web." Readers will find themselves haunted by the questions the narrator struggles to answer in this fictional memoir: "What happened, why did it happen, how could it have happened?" 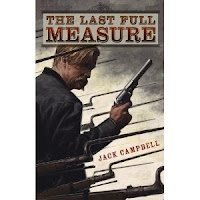 As the author of the bestselling Lost Fleet series, Jack Campbell s name is well-known to fans of interstellar heroics. Now, with his thrilling new novella The Last Full Measure, Campbell brings his keen eye for military adventure and political intrigue to a tale that is earthbound, but no less wondrous...

In a transformed mid-nineteenth century America dominated by plantation owners and kept in line by Southern military forces, a mild-mannered academic from Maine, Professor Joshua Chamberlain, stands accused of crimes against the nation. In court alongside him is Abraham Lincoln, whose fiery rhetoric brands him a 'threat to the security of the United States of America.' Convicted, Chamberlain is sentenced to forty years hard labor, while Lincoln s fate is indefinite detention at Fortress Monroe. But Professor Chamberlain then encounters military minds who understand the true ideals upon which the country was founded and who want to foment revolution. To succeed, they need a leader, someone to inspire the people to take up the cause of liberty: Lincoln. All they have to do is flawlessly execute a daring plan to rescue him from the darkest federal prison.

In The Last Full Measure, Campbell delivers a riveting look at an America where war is imminent, and nothing is as it should be.

In Taylor Anderson’s acclaimed Destroyermen series, a parallel universe adds an extraordinary layer to the drama of World War II, as Lieutenant Commander Matthew Reddy and the crew of USS Walker, cast into that alternate earth, continue to fight the war that rages across the globe.

In the Pacific, as USS Walker is repaired and updated after a previous battle and Reddy is healing from his wounds, planning begins for a bold raid on the very heart of the Grik Empire.

But time is running out for the Alliance army in Indiaa, and the Allied forces in the west must gather in an unprecedented land, air, and sea campaign to destroy the mighty Grik battle fleet and break through to their relief. All other plans go on hold when the attempt proves more difficult—and more heartbreakingly costly—than anyone imagined.

Meanwhile, the struggle continues on other fronts near and far: in the jungles of Borno in distant Southern Africa and in the Americas, where the allies are finally learning the terrible truth about the twisted Dominion.

The Alliance is on the offensive everywhere, but their enemies have a few surprises, including new weaponry and new tactics...and a stunning geographic advantage that Reddy never suspected.

Ethan Kaille isn’t the likeliest hero. A former sailor with a troubled past, Ethan is a thieftaker, using conjuring skills to hunt down those who steal from the good citizens of Boston. And while chasing down miscreants in 1768 makes his life a perilous one, the simmering political tensions between loyalists like himself and rabble-rousing revolutionaries like Samuel Adams and others of his ilk are perhaps even more dangerous to his health.

When one hundred sailors of King George III's Royal Navy are mysteriously killed on a ship in Boston Harbor, Ethan is thrust into dire peril. For he—and not Boston’s premier thieftaker, Sephira Pryce—is asked to find the truth behind their deaths. City Sheriff Edmund Greenleaf suspects conjuring was used in the dastardly crime, and even Pryce knows that Ethan is better equipped to contend with matters of what most of Boston considers dark arts. But even Ethan is daunted by magic powerful enough to fell so many in a single stroke. When he starts to investigate, he realizes that the mass murderer will stop at nothing to evade capture. And making his task more difficult is the British fleet's occupation of the city after the colonials' violent protests after the seizure of John Hancock's ship. Kaille will need all his own magic, street smarts, and a bit of luck to keep this Boston massacre from giving the hotheads of Colonial Boston an excuse for inciting a riot—or worse.

Cold Copper: The Age of Steam by Devon Monk

In steam age America, men, monsters, machines, and magic battle to claim the same scrap of earth and sky. In this madness, one man struggles to keep his humanity, his honor, and his hell-bent mission intact....

Bounty hunter and lycanthrope Cedar Hunt vowed to track down all seven pieces of the Holder—a strange device capable of deadly destruction. And, accompanied by witch Mae Lindson and the capricious Madder brothers, he sets out to do just that. But the crew is forced to take refuge in the frontier town of Des Moines, Iowa, when a glacial storm stops them in their tracks. The town, under mayor Killian Vosbrough, is ruled with an iron fist—and plagued by the steely Strange, creatures that pour through the streets like the unshuttered wind.

But Cedar soon learns that Vosbrough is mining cold copper for the cataclysmic generators he’s manufacturing deep beneath Des Moines, bringing the search for the Holder to a halt. Chipping through ice, snow, and bone-chilling bewitchment to expose a dangerous plot, Cedar must stop Vosbrough and his scheme to rule the land and sky....

War has engulfed the other earth, the parallel universe that Lt Commander Matt Reddy and the crew of the USS Walker now call home. With every hard-won victory and painful defeat, Reddy and the Allies encounter more friends—and even more diabolical enemies.

Cutting short his “honeymoon,” Reddy sails off in pursuit of Hidoiame, a rogue Japanese destroyer that is wreaking havoc in Allied seas. Now that Walker is armed with the “latest” technology, he hopes the four-stacker can handle a straight-up fight against the bigger ship.

Elsewhere, the long-awaited invasion of Grik “Indiaa” has begun, and the Human-Lemurian Alliance is pushing back against the twisted might of the Dominion, even as political machinations threaten the Alliance from within. But the savage Grik have also mastered “new” technologies. And their fleet of monstrous ironclads and a bloodthirsty army are finally massing to strike...