A Conspiracy of Alchemists by Liesel Schwarz

In a Golden Age where spark reactors power the airways, and creatures of Light and Shadow walk openly among us, a deadly game of Alchemists and Warlocks has begun.

When an unusual cargo drags airship-pilot Elle Chance into the affairs of the mysterious Mr. Marsh, she must confront her destiny and do everything in her power to stop the Alchemists from unleashing a magical apocalypse.

The Charge by Sharon Bayliss

When the King of Texas Empire kidnaps Warren's brother, Warren embarks into a still Wild West to save him. On his journey, he makes a discovery that changes his life forever-he and his brother are long-lost members of the Texas royal family and the King wants them both dead. He gets help from an activist Texan named Lena, who's itching to take on the King and happens to be a beautiful firecracker Warren can't stay away from. Convincing her he's not one of the bad guys becomes harder when a mysterious energy stirs in his body, turning his brain into a hive of emotions and memories-not all his own. A legacy of violence is not all he inherited from the brutal Kings of Texas. The myth that the royal family possesses supernatural powers may not be myth at all. Gone are the days when choosing a major was a big deal. Now Warren must save his brother and choose whether or not to be King, follow a King, or die before he can retire his fake ID.

New York, present day. Karen Brown, angry and frightened after surviving a kidnap attempt, has a harsh choice - being eliminated by government enforcer Jeffery Renschman or fleeing to the mysterious Roma Nova, her dead mother's homeland in Europe. Founded sixteen centuries ago by Roman exiles and ruled by women, Roma Nova gives Karen safety and a ready-made family. But a shocking discovery about her new lover, the fascinating but arrogant special forces officer Conrad Tellus, who rescued her in America, isolates her. Renschman reaches into her new home and nearly kills her. Recovering, she is desperate to find out why he is hunting her so viciously. Unable to rely on anybody else, she undergoes intensive training, develops fighting skills and becomes an undercover cop. But crazy with bitterness at his past failures, Renschman sets a trap for her, knowing she has no choice but to spring it...

In a world where Apollo 8 veered tragically off course, the event sent the astronauts, and the space program, hurtling into space, lost and helpless. The tragedy so affected eight-year-old Richard Johansenn that he dedicates his life—and the fortune he amasses along the way—to recovering the capsule. But Richard’s quest proves more complicated than a simple recovery mission, causing him to question the meaning of life, the meaning of death and the heroisms in between. “This is a thoughtful, introspective piece that speaks to themes of hope, doubt, perseverance, and obsession.” —Tangent Online “There is very little of this sort of science fiction published nowadays—the real thing, the exploration of Earth's solar system, without the slightest concession to the fantastic. Rusch celebrates the spirit of exploration, the adventure into the great unknown. … this tribute to humanity's first ventures into space is Recommended.” —The Internet Review of Science Fiction

A Thousand Arms by Robin Sulkosky 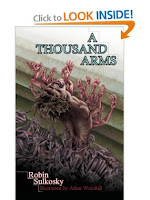 In a time when confederation has failed, the formerly united American colonies are locked in a jealous land war, and local warlords consolidate power. Councilman Quincy Stokely rules the Home Place with a heavy hand, catching W, a house-slave, in the wrong place at the wrong time--cutting off his arm in a bid for silence. Then his other arm. Then his legs. W dwells on his revenge, culminating in the mystifying tale of how the limbless man escapes his kraal to grapple a final time with his hangbellied enemy.

"The Guns of Napoleon" by Peter K. Lean

A professor of history, a mysterious scientific institute in the Russian countryside, an 'impossible' painting, a tablet computer. 'The Guns of Napoleon' is a short 'time-travel' story, which will lead you to an unexpected future.

"The Real Legend of Sleepy Hollow" by Arthur Kraft 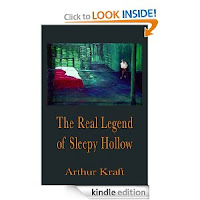 Roaming the countryside as an agent for the Inspector General, reluctant Revolutionary War veteran Andrew Stevens has a chance meeting with a beautiful and elusive escaped bond servant. She leads him to the conclusion that there’s something terribly wrong in Sleepy Hollow; something she’s ashamed to admit.

He arrives disguised as the new schoolmaster, Ichabod Crane. While ridiculed by the local farmers, he is soon adored by his young students. Eventually, Katrina, the town beauty, starts to see through his charade. Then, on Halloween night, he rides into legend on the Hessian Bridge. When a package arrives three days later, Katrina and the whole town of Sleepy Hollow are in for a shock. Then the real story begins. 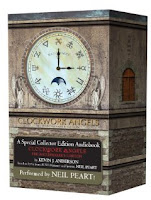 Clockwork Angels: The Watchmaker’s Edition features the unabridged audiobook edition of Clockwork Angels, a novel by bestselling science fiction author Kevin J. Anderson, based on the new concept album by the legendary rock band Rush. This compelling steampunk adventure is read by Rush drummer and lyricist Neil Peart, who first conceived the story for the band’s latest release. This special edition features the complete, unabridged audiobook packaged in a unique, working upright clock tower designed by the band’s album cover artist, Hugh Syme. Intricately themed and largely handmade, this is a beautiful and functional design piece that will be a must-have for Rush fans and steampunkers alike.