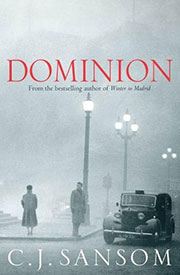 A tough and powerful word, but an appropriate title for C J Sansom's new book. Famous for his Shardlake Tudor series, here Sansom brings us to 1952 in an alternate, authoritarian Britain which made peace with Hitler in 1940. Not formally occupied, Britain is nevertheless dominated by the Nazi regime. Its home-grown "milice" - a vastly expanded and violent Special Branch working hand-in-hand with the Gestapo dispensing brutality from the basement of the German Embassy at Senate House - patrols the dismal and dirty streets.

Germany is still fighting a bitter, savage war against Russia, the British press, radio and television are filled with propaganda and British Jews face ever greater constraints.

The hero, David Fitzgerald, is a civil servant hiding his Jewishness and trying to preserve his marriage which is collapsing under the pressure of his secret life as a spy for the Resistance. The antagonist, Gunther Hoth, a Gestapo policeman hunting Fitzgerald and his Resistance colleagues, is neither stupid nor inexperienced and almost becomes a sympathetic character. This is no "Dick Barton" adventure with clear-cut lines.

Dense with detail that makes its portrayal of everyday life so vivid, the action starts slowly, but by the end, the tension is almost unbearable. Real events like Great Smog of 1952 are woven in to ramp up the threatening atmosphere and clever details about the alternate 1950s are grafted onto real ones, such as British Corner Houses replacing Lyons Corner Houses (Joe Lyons was, of course, Jewish).

The characters are beautifully, often painfully, drawn and fleshed out with past histories full of awkward relations, tiresome colleagues, happy and painful childhoods. Complex, sometimes very frightened, the characters are always human. Their dialogue mirrors this as well as driving the story forward.

Although interacting with the characters' story, the overarching political plot does not reply upon their actions. The seeming important secret is of negative importance. In one way, this is unsatisfactory, in another it emphasises how the actions of ordinary people do not impact or contribute to the bigger one. In this book, that would have been too pat.

Part adventure, part espionage, all encompassed by terrific atmosphere, this is an exciting, but moving account of people who become heroic but remain very human.

Alison Morton writes Roman-themed thrillers with an alternative history setting and hopes to publish the first of a trilogy early next year. She muses on writing, Romans and alternate/alternative history at her blog.
Posted by Mitro at 11:00 AM