O boy, we got a lot to cover this week. So much has been going on, I don't even know where to start.

How about on a high note? For those who did not catch it, we broke our monthly pay view record for the sixth time in a row. Our new record is 12,649 and, of course, I have every intention of breaking it again. What I need from you is help spreading the word. Please continue to share our posts on Facebook, Twitter and other sites.

If you scroll down you might notice something odd about this Weekly Update. I have merged our popular New Releases segment into Weekly Update in an effort to free up more time for all of the excellent contributors who have been waiting to see their works get published. Feedback is appreciated so feel free to tell me whether you like the new setup or not.

Speaking of changes to the blog, you should check out our Facebook group where an important decision about the blog is being left up to you. If you want your voice heard, join the group and cast your vote. You might even win something for your trouble.

Now for some self-promotion, my new flash fiction piece "Revenants in Warfare" was published last week at The Were-Traveler. Read an excerpt from best-selling historian Jorge Roman's new book where he details the use of the dead in warfare from the dawn of civilization to the United Technate's "War on Chaos". Again feedback is appreciated.

I like to welcome our first reader from Côte d’Ivoire. Don't forget everyone to enter our contest to win an e-book copy of Substitution Cipher. The deadline is 2pm CST and I will be announcing the winners at 3pm today. This week we will be rounding off our coverage of alternate American presidents before finally returning to our regularly scheduled program.

Just when Europe thought it was safe from troublesome Eastern foes, a new blood-curdling threat looms off the Western coast in Crusader Kings II: Sunset Invasion. In the latest DLC for the strategy/RPG Crusader Kings II, Paradox Interactive and Paradox Development Studios pose the question: what would have happened if the Aztecs invaded 13th Century Europe (mid- to late-game time)?

For the first time ever, Paradox Development Studio is introducing an alternate history scenario in their strategy games. Introducing new features, the upcoming Crusader Kings II DLC brings the Aztec civilization to European shores, determined to wreak carnage on its inhabitants. If readers think Paradox has unleashed the Tsalal on Europe, you are not far off. The invaders even come with a strange new disease, creating a reverse Columbian exchange.

How plausible, however, will this scenario be? How did the Aztecs gain transatlantic transportation or immunity from Old World diseases? Some long lost colony of Carthaginians or more aggressive Chinese exploration?

Regardless, one must answer the question: are we living in the golden age of alternate history DLC? Are game creators less interested in adding to already existing canon and instead want to have fun with their product by creating imaginative parallel timelines? God I hope so. Anyway I'm off to update my Christmas list and you should return on Thursday to see Chris Nuttall's review of Aztec Century, which has a similar plot to this DLC.

Assassin's Creed 3: Is Washington the Best Choice for King?

Not everyone is excited about the upcoming Assassin's Creed 3 DLC, The Tyranny of Washington. Alex Theologidy wrote an article on Gaming Illustrated explaining why George Washington was a bad choice to be king. Despite some historical support from Continental Army officers and members of the Continental Congress, Alex points out that Washington was a staunch republican and even if he had accepted the crown would have likely based his monarchy on the British model and would not have become a tyrant. Alex instead puts forward Benedict Arnold as a better choice. Having never played the games I don't understand his logic completely, but veterans of the franchise should check it out and get back to me to see if it makes sense.

Those wishing to learn more about the game should check out LA Times review of the game, which praises its historical accuracy. You should also check out Gameplay's interview with game designer Steven Masters where they do discuss the madness of King George DLC:
Or would you rather find out how big of perv Ben Franklin was:
Daughters hid your mothers.

“The best place to start an adventure is with a quiet, perfect life…and someone who realizes that it can’t possibly be enough.”

That is the opening line to Clockwork Angels by Kevin J. Anderson, the new steampunk novel based on the band Rush's new album by the same name. We have covered this book in past updates, but if you want to learn more about how writing with a legendary rocker was like you can by checking out Anderson's interview with Marshall Ward at Rock Cellar Magazine. Of course Anderson is obviously biased to his own work, so if you want to know if the book is good read Kelly McManus' review at The Globe and Mail. Kelly called the novel "good fun" and added "Clockwork Angels could even carry a message for other artists: Don’t stop thinking big."

I think that is good message for everyone, not just rock stars.

Full Steam Ahead on Kickstarter 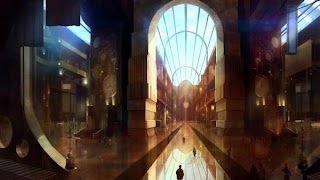 There is a new kickstarter for the game The Ship: Full Steam Ahead, which will be a steampunk sequel to the popular 1920's-themed computer game, The Ship.  Like the original game, Full Steam Ahead will be available on PC (other platforms may follow) and will task players with finding and killing other players before said other players kill them, except this time you do it in a steampunk Victorian/Colonial Era Britain. The game will be released in April 2014 if funding can be secured on Kickstarter.

Aspiring authors take notice. Steve Berman is reading submissions for several projects, you can see a complete list on his website. I am thinking of submitting something for Zombies: Shambling Through History.

You can also enter AndWeWereHungry's inaguaral issue and short story contest: The Flying Elephant. Stories should be between 3k to 6k words and the deadline is Nov 30. More rules can be found on their website as well. I am also planning on submitting something, which I covered in my most recent writing update.

Or you can check out Richard Small's (author of Musings on an Independent Confederacy, Part 2) new small press Signal Star Publishing. Their mission: "Using media to calm an insane planet". Dust off your manuscript everybody.

There is always something to do in this wide, wonderful world (mostly steampunk):

Nov 9-11: Memphis! Comic and Fantasy Convention will feature the steampunk band V is for Villains. 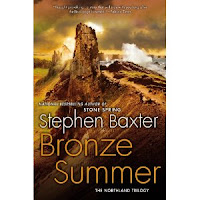 Bronze Summer: The Northland Trilogy by Stephen Baxter
Stone Spring drew readers into an alternate prehistoric scenario that now continues with Bronze Summer. Thousands of years have passed. And a wall that was built to hold back the sea, must now hold back the advancing armies of a reviving Troy…

Emily Dickinson, Superhero - Vol. 1 by Eric Nixon
Emily Dickinson is widely regarded as one of the greatest poets in history. The world saw her as a withdrawn, reclusive writer with a desperate need for privacy. That’s exactly what she wanted you to think.

A New Birth Of Freedom: The Translator by Robert G Pielke

Noam Chomsky argues that communication with aliens would be impossible. Steven Hawking argues that it would be extremely unwise even to try. What if it were absolutely necessary to do so? This question arises with extreme urgency at the Battle of Gettysburg in 1863. [See my review of A New Birth of Freedom: The Visitor.]

Railroad Spine by Geonn Cannon
In a world where a little knowledge truly is a dangerous thing, Candice “Dice” Bodger is about to get an awful education.

A Tour With The Devil by Brian Turner
During the second World War we were close to losing a number of key battles. This dramatic story assumes the Normandy landings failed and the Allies were driven back into the sea. The Nazis then counter attacked and quickly overran Britain and eventually other key parts of the World.

And it wasn’t just Cuba… by Jim Smith at Conceptual Historian.

Countries… Culture… the Wicking Effect by Raye Dean at Steamed!

Great Black Authors of Science Fiction & Fantasy: Past & Present at Chronicles of Harriet.

Review of Dominion by C.J. Sansom done by Alison Morton.

Review of Gettysburg by Gingrich and Forstchen at Conceptual Historian.

Review of Grant Comes East by Gingrich and Forstchen at Conceptual Historian.

Review of Never Call Retreat by Gingrich and Forstchen at Conceptual Historian.

Review of Opening Atlantis by Harry Turtledove at Yahoo Voices.

Vintage Tomorrows -- What Can Playing With the Past Teach Us About the Future? by Mark Frauenfelder at boingboing.

Review of Tai Chi Hero or 太极2英雄崛起 (2012) at Thinking about books.

Hakuoki returns as a PSP action game by JC Fletcher at joystiq.

Elementary: Season 1, Episode 2. While You Were Sleeping review by David Marshall at Thinking about books.

The World of Steam by Matt King at Kickstarter.

Matt Mitrovich is a long-time fan of alternate history, founder and editor of Alternate History Weekly Update and a volunteer editor for Alt Hist magazine. His fiction can be found at Echelon Press, Jake's Monthly and The Were-Traveler. When not writing he works as an attorney, enjoys life with his beautiful wife Alana and prepares for the inevitable zombie apocalypse. You can follow him on Facebook or Twitter.
Posted by Mitro at 11:00 AM