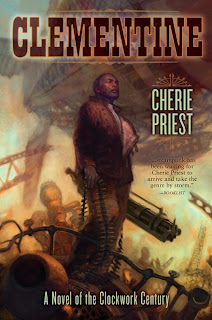 It’s Matthew W. Quinn again, and I’ve got another review for you. It’s Cherie Priest’s Clementine.

Set in Priest’s Clockwork Century universe, the novel tells the tale of former Confederate spy Maria Isabella “Belle” Boyd who finds herself in the employ of the famous (or infamous) Pinkerton National Detective Agency in Chicago.

For starters the novel, published by Subterranean Press, is a quick read. It’s exactly 201 pages. I’m surprised there was even a hardback edition issued it’s so short, but then again, it is written by Priest, one of if not the major author of steampunk. Although the short length precludes subplots and lots of depth, many readers won’t mind.

Secondly, the novel starts out with a bang. Air pirate and escaped slave Croggon Beauregard Hainey is chasing after his airship, which has been stolen from him, in another (stolen) airship. No boring expository beginning here, but straight to the fun.

I also liked how each chapter begins with the name of the main character, be it Hainey or Boyd. And when the characters meet, there’s a bit of humor. Chapter Eight, for example, is titled “Our Players are Compelled to Collaborate.” I actually laughed upon seeing it.

The novel also introduces some interesting concepts, including a tiny dirigible-like flyer that carries two people. It fulfills the function of a personal plane or helicopter in a time where the technology for such things isn’t available. I like it.

There’s not a whole lot that’s bad about the book. I’d like some more information about how the superweapon that becomes a major part of the plot later on is supposed to work. A weapon of its nature would need line of sight to devastate an enemy city — we’re not talking a conventional artillery piece like Gerald Bull’s “Project Babylon” (the unfinished “Super Gun” of Gulf War fame) that could attack enemy targets from safe positions here. Also, the book jacket implies Boyd has to collaborate with Hainey, whom she is hunting, when there’s some kind of betrayal. That’s not how it goes down, although that’s not really much of a problem.

Also, I’d have liked some more thoughtfulness on the part of both Hainey and Boyd. The former is an escaped slave, but most of his targets are in the Union states (where it’s easier for a black man to move about), never mind that the state that whipped and imprisoned him is the Union’s enemy. Meanwhile, Boyd has to make decisions about loyalties, most importantly in a scene very late in the book where one might think she’s seriously conflicted. Although too much of this would go against the short and sweet nature of the book, a few extra paragraphs might help.