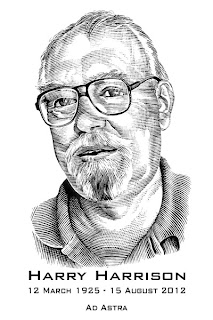 American science fiction author Harry Harrison passed away today. Born on March 12, 1925, he is best known for his character the Stainless Steel Rat and the novel Make Room! Make Room! (1966); the latter was the basis for the film Soylent Green (1973).

Although he was best known for his general science fiction, Harrison was a prolific alternate history writer. Readers of Weekly Update have heard Chris Nuttall and myself discuss his alternate American Civil War Stars and Stripes trilogy, where the early death of Price Albert removes his moderating influence over the Trent Affair leading to not only British intervention in the Civil War, but also a war to regain the lost colonies.

Now I won't mince words, Stars and Stripes wasn't Harrison's best work, but I also want to go on record and say he was still a good author. My favorite Harrison novel has to be the The Hammer and the Cross. The novel is the first in a series following a half-English, half-Danish bastard slave named Shef who sides with the Vikings invading England to save the woman he loves in 865 AD. He ends up king of a religiously-tolerant and technologically advanced northern England. The sequel novels, which I have not read yet, describe Shef's campaign in Scandinavia and his conflicts with the Holy Roman Empire. I highly recommend the first novel and I hope to share my views of the entire series in the near future.

If you listened to my episode on Dissecting Worlds, you probably heard Kehaar and Matt Farr also mention their own favorite Harrison works (after ripping into Stars and Stripes). I believe they mentioned The Stainless Steel Rat and A Transatlantic Tunnel, Hurrah! While Stainless Steel Rat is non-allohistorical series, the second volume of the series (The Stainless Steel Rat Saves the World) involves the hero travelling back in time to fix history after discovering a world where Napoleon conquered England. A Transatlantic Tunnel, Hurrah! meanwhile, involves a very divergent world that includes an Islamic Spain, an early death for Louis XI and a failed American Revolution. There the main character is trying to build an tunnel connecting North America with Britain and was chosen by you the readers as having some of the best dialogue in alternate history.

Other alternate history novels by Harrison include A Rebel in Time (where a racist army officer goes back in time to help the Confederacy, pre-dating Turtledove's Guns of the South by almost a decade) and the Eden trilogy (where intelligent dinosaurs have colonized the New World only to discover another sapient species already there). Harrison also wrote a lot of short fiction set in alternate timelines including "Letter from the Pope", "Down to Earth", "Run from the Fire" and "The Wicked Flee".

While I might not have always agreed with his speculation about the past, I can't deny that Harrison had a profound affect on the genre. He was a prolific writer who showed that history could be fun and entertaining.  He will be missed by all of us who dream of other whens.

Email ThisBlogThis!Share to TwitterShare to FacebookShare to Pinterest
Labels: A Rebel in Time, A Transatlantic Tunnel Hurrah, Eden trilogy, Harry Harrison, RIP, Stars and Stripes, The Hammer and the Cross