Review: The Confederate States of America by Roger L. Ransom 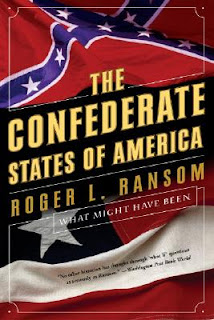 When someone wants to change the outcome of a war, they usually jump into their time machine and give the  losing side modern weapons, like AK-47s.  I for one think knowledge is a more potent weapon, so if I wanted to change the outcome of the American Civil War I would go back to 1861 and give Lee and Davis The Confederate States of America: What Might Have Been by Roger L. Ransom.

The Confederate States of America is a counterfactual history of the America stretching from the beginning of the country to the end of this timeline's Great War.  This is not a fictional narrative, but instead a scholarly treatise about what strategy the CSA needed to adopt to the win the Civil War.  He begins the novel by describing the economic situations of both the North and the South, while undercutting certain misconceptions about the Civil War such as the inevitability of the conflict and the profitability of slavery.

Ransom describes the history of the war itself, showcasing the mistakes the Confederate leadership and their instances of bad luck (i.e. the death of Thomas "Stonewall" Jackson in 1863).  Following his breakdown of the war, Ransom presents his counterfactual scenario where the Confederacy adopts a strategy of withdraw in the west, appoints more competent leadership in Tennessee and gives Lee more lucky breaks in his two invasions of the Union.  The resulting changes creates a military stalemate and a growing antiwar movement in the Union. Lincoln is then defeated in the 1864 election and Great Britain recognizes the Confederacy.  The new Union government takes Britain's offer of a negotiated peace and the war ends with the Treaty of Toronto.

Ransom briefly considers the fates of the two Americas following the end of his counterfactual Civil War and, in light of modern American politics, paints an ironic scenario.  For the CSA, Ransom predicts an economic crisis in the 1880s brought on by the rise of foreign cotton markets, low cotton harvest due to depleted soil and declining value of slaves.  Assuming that the large planters fail to block any reforms, Ransom believes an anti-slavery coalition would rise and gain control of the presidency (which under the Confederate constitution was a more powerful branch of government than its Union counterpart).  This new coalition would adopt a program of compensated emancipation that would hopefully be invested in manufacturing and/or other crops so as to diversify the Confederate economy.

Meanwhile, in the United States, with the failure of a strong central government to keep the nation together, coupled with the nonexistence of the 14th Amendment's due process clause, the states and Congress would become the dominant institutions in the Union.  Each state would develop their own economic and social policies without the federal government's interference.  Thus you have a North that champions the idea of states' rights and a South with a strong central government with a history of providing economic stimulus directly to its citizens.  The obvious difference, however, is that you have a south with a racial caste system which Ransom believes would have been worse for blacks than OTL.

Surprisingly when Ransom takes the opportunity to speculate about foreign affairs he agrees with Harry Turtledove that the Confederacy would ally itself with Britain while the United States, hemmed in by the British in Canada and the Confederacy to the south, would move into Germany's sphere of influence.  While some might cringe at his counterfactual epilogue that features President Roosevelt leading the United States in a war against the Confederacy led by President Wilson, you will find that the outcome has more in common with the attempts to create a more plausible Timeline-191 on AH.com than the Turtledove series.

If I have any criticism about Ransom's scenario is his changes to Lee's campaign.  In my humble opinion, a more defensive strategy by the famed general would have been a better idea for the CSA, but perhaps Ransom is right in believing that the government of the Confederacy could not afford politically to keep the Army of Northern Virginia contained in the south.  You can decide for yourself if you pick up a copy of The Confederate States of America: What Might Have Been, just be warned you cannot get it in e-book.