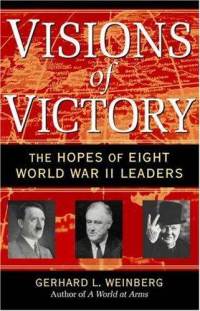 Gerhard L. Weinberg is well known for producing A World At Arms: A Global History of World War II.  In Visions of Victory, he takes on the dangerous - some would say impossible - task of studying the victory plans of eight World War Two leaders; Hitler, Mussolini, Tojo, Stalin, Churchill, DeGaulle, Chiang and Roosevelt.  (For some reason, neither Truman nor Mao are mentioned.)  Their dreams of victory have their effect upon the outcome - and some of his conclusions may surprise you.

Weinberg makes some further predictions, including the resettlement of thousands of Germans and 'Aryans' into Russia, the crushing of any feminist movement and worse.  Hitler suffered from appealing ignorance about the world - apparently convinced that New Zealanders lived in trees (WTF?) - and used that to guide his speculation.  One would imagine that the performance of the ANZAC forces would have convinced him otherwise, but…ironically, some of the people who most benefited from Hitler's defeat were his own former comrades from WW1; the crippled, the deaf, and the other handicapped.

One thing stands out - a world with Hitler would have been one of endless war.

Mussolini's war aims have received much less scrutiny, not least because the Italians performed so badly in WW2.  Weinberg says much less about him, but considers him to be a gambler on a far greater scale than Hitler, a man who gambled, won slightly, and then threw it away.  His aims apparently included a major empire in Africa and major holdings in Malta, Corsica, Cyprus, Greece and portions of the French Riviera and southeast Switzerland - just how long they would have lasted if Hitler had to bail him out is questionable.  Hitler's admiration for Mussolini himself might have remained fairly strong, but he had certainly lost whatever he had once felt for the Italian armed forces.  Mussolini had no grand plan for Empire; he only wanted to take opportunities…and bit off much more than he could chew.

Tojo remains something of an enigmatic figure, not least because Japan never possessed a dictator.  Weinburg, however, is fairly confident that Japan held much of what it wanted in the Pacific in the six months following Pearl Harbour, although it lacked the economic power to actually hold them.  Assuming that America gives up the war, for whatever reason, the Japanese would have ushered in a world of amazing brutality across the 'Bamboo Curtain,' one that would have shocked the world.  There is an old Giles cartoon about Hitler complaining that the Japanese had invented some new atrocities and were showing the Germans up - "we'd better invent some new ones."  East Asia under Japanese rule would have been a nightmare.

(One of the odder little facts to pop up is a German-Japan division of the world; Japan would apparently have had Cuba and Alaska.)

Despite that, Japan lacked the capability to hold onto its empire.  Weinberg believes that the Japanese would have faced much more opposition from the natives over the coming years - China had gobbled up thousands of Japanese soldiers for no apparent benefit - and it would have collapsed.

Chiang has never been treated well by historians.  To some extent, this is unsurprising; China was never capable of being more than a punching bag for Japan.  The Chinese might have had more opportunity, had they not lost badly to Japan in 1944, which destroyed the best of Chiang's forces.  Even so, Chiang apparently was prepared to accept a disarmed Japan, provided that the Chinese were permanent members of the UN Security Council.  Chiang dared to hope that the Chinese would be able to recover Hong Kong before the British, but the failures within the Chinese military made that impossible.

Stalin's thinking on the war was, naturally, very different from everyone else's thinking - with the possible exception of Hitler.  Stalin seems to have intended to take advantage of the 'Capitalist War' by securing the USSR's borders, including Finland and Romania.  Other than that, he wanted to remain out of the war and was reluctant to believe that Hitler genuinely meant him harm, something that cost the Red Army its chance at an early victory.  Once Hitler had started the war, however, Stalin seems to have been willing to discuss a peace with Germany, even as late as 1944 - is anyone else thinking of Fox on the Rhine here?  Stalin was, perhaps, the most successful of the allied leaders in WW2, at least in the short term.  In the longer term, the new territories of WW2 cost the USSR its existence.  Stalin's demands, however, were for security and he was willing to pay any price to ensure that the USSR was secure.

Churchill and DeGaulle seem to have been two sides of the same coin.  Both of them, according to Weinberg, seem to have considered the war in terms of gaining more territory for their empires, unaware that the time for that had drifted past.  Weinberg is wrong here - Stalin did gain territory for his empire - both the French and the British simply lacked the power to do so.  DeGaulle, despite the major weakness of the French forces, attempted to gain additional territory and to 'restore French pride,' something that infuriated the other Allies.  France, they thought, was in no position to make demands.  Churchill, who had much more manoeuvring room, did better, but in the end the British Empire had been slain by its own economy.  The best that can be said about that was that the British avoided an Algeria or a Vietnam.  Churchill might not have believed that that language of the Atlantic Charter applied to British possessions, but Britain didn't have the power to make that vision stick.  Stalin did.

Finally, Roosevelt.  Roosevelt remains as enigmatic as he always was - on one hand, he was a pragmatic politician, on the other, he was a dreamer without any grip on reality.  Roosevelt's vision for the future - the UN, the global network, the collapse of the colonial empires - came closest to fruition, but at the same time Roosevelt was unable or unwilling to recognise some of the problems in his global vision.  It was preposterous to believe that Stalin, much less Churchill and DeGaulle, would meekly accept a permanent American monopoly over the atomic bomb - it was downright impossible to imagine that the rest of the world would accept only the 5 great powers having weapons!  Roosevelt, as a man who had been in power for years, should have understood the limits of power - there were times when he seemed to believe that power has no limits.  Stalin was not impressed by anything, but power, and Roosevelt's willingness to embrace the Soviet Union cost Eastern Europe its freedom.  Despite that, Roosevelt's vision of the future came the closest to realisation, which has Weinberg considering him the hero of the book.  The real world is not neat and tidy - Roosevelt seemed to have missed that point.  American Empire was easy to recognise - except by Americans.

In conclusion, this is a fascinating book.  Its well worth a read.