Review: "The Guns of the South" by Harry Turtledove 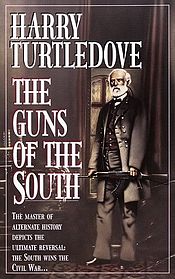 Although The Guns of the South is not the first novel to explore the consequences of a bunch of time travellers bringing future technology to the past, it holds a special place in Alternate History’s collective heart. Harry Turtledove’s singular novels are often far better than his multi-volume sets and The Guns of the South shows his talents before he became famous and stopped working for his pay.

The basic plot of The Guns of the South covers the arrival of a mysterious bunch of men from Rivington (a fictional town in Virginia, USA) in General Lee’s camp in early 1864. The visitors, calling themselves America Will Break (AWB; think about it), offer Lee advanced technology, including AK-47s, to help him win the war. It rapidly becomes clear that the visitors are refugees from post-Apartheid South Africa, intent on creating a state that will assist South Africa in the 20th Century. Seen through the eyes of General Lee and a lowly soldier in the Army of Northern Virginia, the CSA is rapidly revitalised and goes on to capture Washington and secure their independence.

But the story doesn’t end there. Turtledove’s characters see what life in an independent CSA might have looked like, including a return to old and dangerous habits – and slavery, of course. The post-war discussions over reparations and who gets what piece of territory are fascinating. When Lee runs for President – and wins, apparently on an anti-slavery platform – AWB sets itself against the CSA, leading to a mini civil war in the CSA and the eventual defeat of the organisation and the end of slavery within the American South. There are even hints at greater changes, with weapon-making technology taking a step forward and a major clash developing between the UK and the North. The book is remarkably fascinating.

Turtledove is quite convincing when he discusses the limitations of the future knowledge and tech. The news that one side is going to do something will change history, rendering the newcomers as blind as any of the South’s generals. Their tech has limits – the capture of Washington is a very close-run thing – and even the best at their disposal is insufficient to save AWB from the CSA Army. Computers, present with the AWB men, are not a renewable resource – once they’re gone, they’re gone.

The general atmosphere of the book is quite convincing in many ways. It’s easy to see Lee, Davis and his fellows operating as they do in the book. Lee changes with the times, while Nathan Forrest, the founder of the original KKK, remains a hard-line bastard. The more general details are right as well, some of them quite fascinating in their own right. One of the men of the CSA Army is actually a woman, who dressed up as a boy to see how the war was being fought.

It’s worth noting that there are some minor problems with the overall story. The first lies in the details – Turtledove ignores the presence of two additional bridges in Washington that Grant could use to bring troops into the capital and move to counter Lee’s bold stoke. The battle might still be winnable, but it wouldn’t be ‘easy’ – and Turtledove never portrays it as easy.

The second problem lies in the way that slavery was dealt with. The CSA never had a united war effort. Davis might have been President, but powerful state governors and vested interests always played silly buggers with the war effort. (See Dixie Betrayed or Look Away: A History of the Confederate States of America for details.) It is unlikely that the formation of a post-war CSA would be easy, or that there would be so little resistance to the end of slavery. Slavery was, like it or not, a very important part of the CSA’s economy and constitution. (It was actually protected by the constitution!) Simply doing away with it would be costly and troublesome. I doubt it would solve all the CSA’s problems overnight, even if Lee succeeded in banishing slavery. I’d bet good money that most of the costs of slavery would be repaid by taxes on the newly-freed blacks, who would be unable to pay them and end up sinking back into debt or becoming ‘free’ sharecroppers.

But don’t let me discourage you. With The Guns of the South, Turtledove reminds us of why he became popular in the first place.

Chris Nuttall blogs at The Chrishanger and has a website by the same name. His books can be found on Amazon Kindle.
Posted by ahwupdate at 3:00 PM