The Walls of the Universe by Paul Melko 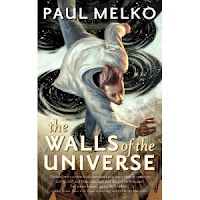 John Rayburn thought all of his problems were the mundane ones of an Ohio farm boy in his last year in high school. Then his doppelgänger appeared, tempted him with a device that let him travel across worlds, and stole his life from him. John soon finds himself caroming through universes, and, when the device breaks, unable to return home. John settles in a new universe to unravel the machine’s secrets and fix it.

Meanwhile, his doppelgänger tries to exploit the commercial technology he’s stolen from other Earths: the Rubik’s Cube! John’s attempts to lie low in his new universe backfire when he inadvertently introduces pinball. It becomes a huge success. Both actions draw the notice of other, more dangerous travelers, who are exploiting worlds for ominous purposes. Fast-paced and exciting, this is SF adventure at its best from a rising star.

The Archaeologist by Bo Widerberg

Professor Alexis Arson, is ordered to time travel back to the past. He is to find out if the strange behaviors of our fore-fathers are true. Going back, all the way to the year 2050 AD, he finds out that the informations they had about this ancient time was true. While spending his time in New York, to get the informations asked for, he meet a young man, that later will follow him back to the Earth he lives on. He lives on the second Earth, the Alpha Earth. There are more then one Earth, including the old one, there are five altogether. And, all five are identical to the last little creek.

The Fist of God by M. E. Brines

It’s 1940 and the fires of war have set Europe ablaze, but America remains blissfully neutral. To please his parents, skeptical Stuart Mackenzie studies to become a reverend. He has about as much concern for the outcome of the war as he does for South American sports scores. But his idealistic brother, a former bootlegger with ties to the Purple Gang, volunteers for the Royal Air Force. And when his hurricane is shot down, Stuart abandons his studies to seek bloodthirsty revenge.

The Fist of God follows Stuart’s adventures through secret agent training at a remote manor in Scotland, sabotage missions in Occupied France, to the final mission at the Wewelsburg, a medieval fortress the SS had turned into an occult research center. Can a confirmed skeptic defeat a coven of Nazi sorcerers on their home ground? What chance will the mundane weapons of the Allied powers have against ancient magic and an artifact said to have slain the very Son of God?

The United States and China had achieved an unofficial peace or cease of hostilities with Japan and Germany in 1946. Japan retained control of over half of China.

Germany had succeeded in taking great Britain with operation Sea Lion. With England no longer in the war the United States had no way to continue it’s bombing raids on Germany. Germany was now also free to move more men and supplies from the West to the East for the fight against Russia. It was at this time the United States dropped the first atomic bomb on Hiroshima. Germany to had just developed the atomic bomb and was about to strike New York City.

When the United States announced they now had a fusion bomb that could destroy the entire world. This bomb was so powerful that is could not be used as an offensive weapon. Its use meant everyone would die. If Germany and Japan used their atomic power they would be engaging in a war no one could win. With recent bombing of Hiroshima, Japan and Germany were convinced to stop further aggression. And so the world settled into an uneasy unofficial peace for years. Until 1957

Trust and Lies (The Battle of Monster Island) by Bloodstone

The Battle of Monster Island

This series of short stories chronicles the strange events that befell a group of Rangers who were shot down over a remote island, overrun with monsters. Not only do they have to contend with the environment and the nightmarish creatures of the island, but a group of Japanese soldiers led by a shadowy, scheming ninja has also been stranded on the island. The key to their survival is a radio tower, but to reach it, they will have to overcome the most alien and fearsome creature of all.

After a raucous battle with a ninja, enemy soldiers and mutant apes, the Captain finally reaches the hilltop and discovers someone else may be living on the island. But before he can investigate, he will have to spend the night camped in the dreadful jungle, surrounded by the enemy.

Do you want to see your work given a shout out on our New Releases segment? Contact Mitro at ahwupdate@gmail.com.  We are looking for works of alternate history, counterfactual history, steampunk, historical fantasy, time travel or anything that warps history beyond our understanding.