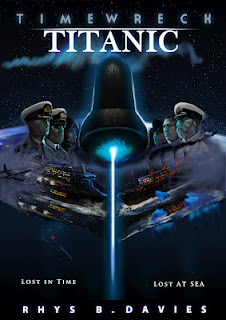 QUOTED:
"A fleet of ships have gathered in the North Atlantic to commemorate the 100th anniversary of the most famous maritime disaster of all history.

Suddenly, a pulse of light engulfs several of the ships, who find themselves on an open ocean dotted with icebergs. Desperately trying to make contact with the outside world, they detect no satellite or radio signals, except for a single vessel just off to the north, who is sending out messages of distress in archaic Morse code.

Her name is the RMS Titanic. She has struck an iceberg and is sinking.

Displaced a century into the past, the ships of the Titanic Memorial Fleet find themselves suddenly intervening in the very disaster that they had gathered to remember.

Can they change the outcome of this night?

Should they even try?

What will be the consequences of introducing modern ideas and technologies into a world ill-prepared to handle them, on the brink of a century of catastrophic war and change?

And can they ever go home?"

Piracy, the Nazi "Bell" project and the "Philadelphia Experiment", a memorial fleet on the centennial of the sinking if the Titanic and a Royal Navy nuclear ballistic missile submarine: those are the ingredients of this story.

Right from the start Timewreck Titanic manages to impress: slick, professional cover, and with close to 220,000 words you get the literary equivalent of tons of content. Davies shows a great command of language in his writing, almost playfully juggling contemporary English and the styles and expressions used at the beginning of the 20th century.

The author also manages to present his story through a quite staggering number of characters (both historic and fictional) - all surprisingly well fleshed out - and it are those characters and the culture clash they live through which makes this novel a worthy read. That's not to say I found *all* of them interesting, but this is a personal review and tastes do differ.

A minor point the bugged me was that in my view the initial contacts between the inhabitants of the 1912 timeline and the "Uptimers" felt a bit too smooth, though I suppose the appearance of a liner dwarfing the "Titanic" should speak louder than a thousand words.

That's not to say the novel doesn't mildly stray off course once in a while, be it in its recollection of the sinking of the Lusitania as a crime (she was an auxiliary cruiser carrying a belly full of munitions, as proven by the exploration of the wreck only a few years ago), Germany being the sole aggressor of WW1 (really, in WW1 either *everybody* or *no one* was the aggressor) or something falling from the sky over Berlin and killing a few innocents on the "Rhur lakes" (there are no such lakes).

But these are minor chinks in the narrative's armor. Due to these and some editing issues Timewreck Titanic didn't quite make it to a solid "A".

I suppose we'll hear more of Mr. Davies. I for one would love to see how he develops the world the rescue of the Titanic and the infusion of people from the future into the year 1912 has created.

War Blogger is the Internet handle of Sebastian P. Breit, author of the alternate history novel Wolf Hunt. You can find news, reviews, and commentary on all matters regarding WW2 on his blog, The War Blog, and follow his writing progress on his personal website.
Posted by Mitro at 11:00 AM