With What If History being silent since December, I have found myself without an AH-themed podcast to listen to at work.  So I started searching for a new podcast and luckily I came upon Twilight Histories by Jordan Harbour. 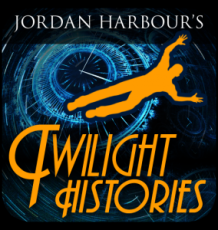 Now most podcasts I listen to involve either one person talking to the audience; or two or more people conducting an interview or having a conversation.  The thing about podcasts, however, is that they are a great format to use when you want to tell the story.  In Twilight Histories, you are a time traveler exploring exotic locales throughout history, with Jordan acting as a narrator.  This was a unique format that I had never experienced before and I was drawn in immediately.  I could say more, but perhaps I will let Jordan explain the rest:

The Twilight Histories is a podcast for the history lover who enjoys a good story. This podcast is about bringing events to life where you are the adventurer. It’s about time travel to exotic worlds, and it’s about creating a sensuous experience of the past. Written in the shadow of such great podcasters as Dan Carlin, Mike Duncan, Rob Cain and Nate DiMeo, the Twilight Histories delivers a unique historical perspective with an edge.

Jordan Harbour spent many summers as an archaeologist excavating such sites as Carrickmines Castle in Ireland and at Al Humayma in the Middle East. It was not just travel that inspired Jordan to take up archaeology, but the chance to touch the very stones the ancients lay. History, to Jordan, is a 4-Dimensional experience. And that’s the philosophy behind the Twilight Histories.

Each podcast in the Twilight Histories explores a radically different space in history. The podcast explores the strange, the extreme and the exotic. It is a Roman street in the Republic, a Japanese slave camp in WWII, a harem in the sultan’s caliphate and the greatest city in the world collapsing under a bronze cannon.

As you can see, Twilight Histories is predominantly a history podcast so you may be asking why I am bothering to discuss it on a blog dedicated to alternate history.  That is because Jordan has no scruples about taking time travelers to worlds that never existed.  In his third episode we visit a Roman Empire that had a sixth good emperor.  We take a journey of 400 years and watch a Rome that never stopped expanding thanks to the aid of steampunk inspired weaponry.  The next episode also promises to wet any alternate historian's appetite.  It is titled "Axis Earth".

Does the podcast have any flaws?  Probably the only major downside is the wait between episodes.  Jordan appears to be averaging two month gaps before releasing a new episode.  He explains in the podcast that is because of the amount of research he puts into the making of every episode, which I guess can't fault him on, but the anticipation while waiting for next episode can be maddening.

I highly recommend that you subscribe to Twilight Histories.  Those interested should also check out the Google+ and Facebook groups or follow Jordan on Twitter (@twilighthistory).  Jordan has also written a guest post for Weekly Update titled the Top 5 Alternate Histories of Rome.  Go and read it, if you haven't already, it is close to reaching the top ten most viewed posts on this blog.