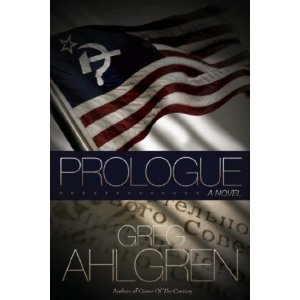 Time travel is a common trope among alternate history and science fiction in general.  People often desire to change the past for the better, even if the outcome of their intervention does not always result in the present they longed for.  This trope is prominent in Greg Ahlgren's Prologue, a novel that showcases what someone will risk to save the world.  This is not, however, your usual time travel novel, it is also a mystery and like any good mystery it begins with a body.

The year is 2026 and the Soviet Union has won the Cold War and occupies most of the former United States, now referred to as the American Soviet Socialists Republic, where the red states are Red and the blue states are special districts where limited capitalism is allowed to help fund the Soviet empire. Meanwhile, an American insurgency calling itself the "Descendants" commits acts of random sabotage and sporadic bombings against the Soviets and their collaborators.  The rest of the world has also fallen under the Soviet yoke.  Thanks to Che Guevara and the American defector O. H. Lee, Latin America fell to Communism.  The Soviet Union has defeated China in a devastating war and only Europe remains free from Soviet influence.

Two MIT physics professors, Paul deVere and Lewis Ginter are working on a project to change the status quo. They have created a time machine (that follows the multiverse theory of time travel) with the help of the Descendants and have recruited deVere's ex-girlfriend and history professor. Together they develop a daring plan to go back to the early 1960s to alter the course of American history.  They are being watched, however, by Soviet intelligence agents Igor Rostov and Natasha Nikitin who will take any measures necessary if they are a threat to the Soviet Union.  The Descendants are also becoming more distrustful of deVere and Ginter and want one of their own in on the project.  When they finally make their trip to the past they discover that not everyone is as they seem and their are plans within plans.  Everything comes to a point on November 22, 1963.

The story starts off slowly as Ahlgren introduces the reader to the world and characters he created.  At one point, however, I groaned when I was subjected to a "as you know Bob" moment.  The entire history of this alternate timeline is revealed to us when deVere conveniently steps into a library that has a diorama and helpful young Soviet women that explains the history from the moment of the point of divergence to the present day.  We learn how Kennedy's decision to not intervene in South Vietnam and appeasement tactics by his successors eventually put the United States in danger of biological and dirty nuke attacks, which caused American to welcome the Soviets in exchange for security.

Yet I stuck with the book and was rewarded for this.  The reader will remained engaged in the novel as tensions mount while the characters race against time to change history before their ride back to the present closes.  Historical figures like Strom Thurmond and Harrison Salisbury reflect the research Ahlgren put into the novel.  Meanwhile, Ahlgren makes good use of both mainstream history and conspiracy theories to prove how plausible it is for time travellers to change the course of the Kennedy assassination.

Prologue starts slow, but makes up for it as an exciting time travel thriller that will leave the reader wondering what they would do if given the chance to change the past.