Leanna Renee Hieber's gaslamp fantasy series continues and the action ramps up in Eterna and Omega.

In New York City, fearing the dangers of the Eterna Compound--supposedly the key to immortality--Clara Templeton buries information vital to its creation. The ghost of her clandestine lover is desperate to tell her she is wrong, but though she is a clairvoyant, she cannot hear him.

In London, Harold Spire plans to send his team of assassins, magicians, mediums, and other rogue talents to New York City, in an attempt to obtain Eterna for Her Royal Majesty, Queen Victoria. He stays behind to help Scotland Yard track down a network of body snatchers and occultists, but he'll miss his second-in-command, Rose Everhart, whose gentle exterior masks a steel spine.

Rose's skepticism about the supernatural has been shattered since she joined Spire's Omega Branch. Meeting Clara is like looking into a strange mirror: both women are orphans, each is concealing a paranormal ability, and each has a powerful and attractive guardian who has secrets of his own.

The hidden occult power that menaces both England and America continues to grow. Far from being dangerous, Eterna may hold the key to humanity's salvation.

The Last Days of New Paris by China Miéville

A thriller of war that never was—of survival in an impossible city—of surreal cataclysm. In The Last Days of New Paris, China Miéville entwines true historical events and people with his daring, uniquely imaginative brand of fiction, reconfiguring history and art into something new.

1941. In the chaos of wartime Marseille, American engineer—and occult disciple—Jack Parsons stumbles onto a clandestine anti-Nazi group, including Surrealist theorist André Breton. In the strange games of the dissident diplomats, exiled revolutionaries, and avant-garde artists, Parsons finds and channels hope. But what he unwittingly unleashes is the power of dreams and nightmares, changing the war and the world forever.

1950. A lone Surrealist fighter, Thibaut, walks a new, hallucinogenic Paris, where Nazis and the Resistance are trapped in unending conflict, and the streets are stalked by living images and texts—and by the forces of Hell. To escape the city, he must join forces with Sam, an American photographer intent on recording the ruins, and make common cause with a powerful, enigmatic figure of chance and rebellion: the exquisite corpse.

But Sam is being hunted. And new secrets will emerge that will test all their loyalties—to each other, to Paris old and new, and to reality itself.

The Guild Conspiracy: A Chroniker City Story by Brooke Johnson

In the face of impossible odds, can one girl stem the tides of war?

It has been six months since clockwork engineer Petra Wade destroyed an automaton designed for battle, narrowly escaping with her life. But her troubles are far from over.  Her partner on the project, Emmerich Goss, has been sent away to France, and his father, Julian, is still determined that a war machine will be built. Forced to create a new device, Petra subtly sabotages the design in the hopes of delaying the war, but sabotage like this isn’t just risky: it’s treason. And with a soldier, Braith, assigned to watch her every move, it may not be long before Julian finds out what she’s done.

Now she just has to survive long enough to find another way to stop the war before her sabotage is discovered and she’s sentenced to hang for crimes against the empire. But Julian’s plans go far deeper than she ever realized . . . war is on the horizon, and it will take everything Petra has to stop it in this fast-paced, thrilling sequel to The Brass Giant. 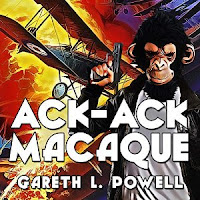 In 1944, as waves of German ninjas parachute into Kent, Britain's best hopes for victory lie with a Spitfire pilot codenamed Ack-Ack Macaque. The trouble is, Ack-Ack Macaque is a cynical, one-eyed, cigar-chomping monkey, and he's starting to doubt everything, including his own existence.

A century later, in a world where France and Great Britain merged in the late 1950s and nuclear-powered Zeppelins circle the globe, ex-journalist Victoria Valois finds herself drawn into a deadly game of cat and mouse with the man who butchered her husband and stole her electronic soul.

Meanwhile, in Paris, after taking part in an illegal break-in at a research laboratory, the heir to the British throne goes on the run. And all the while, the doomsday clock ticks towards Armageddon.

Hystopia: A Novel by David Means 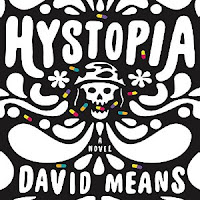 At the bitter end of the 1960s, after surviving multiple assassination attempts, President John F. Kennedy is entering his third term in office. The Vietnam War rages on, and the president has created a vast federal agency, the Psych Corps, dedicated to maintaining the nation's mental hygiene by any means necessary. Soldiers returning from the war have their battlefield traumas "enfolded" - wiped from their memories through drugs and therapy - while veterans too damaged to be enfolded roam at will in Michigan, evading the government and reenacting atrocities on civilians.

This destabilized version of American history is the vision of 22-year-old Eugene Allen, who has returned from Vietnam to write the book-within-a-book at the center of Hystopia. In conversation with some of the greatest war narratives, from Homer's Iliad to the Rolling Stones' "Gimme Shelter", David Means channels the voice of Allen, the young veteran out to write a novel that can bring honor to those he fought with in Vietnam while also capturing the tragic history of his own family.

The critic James Wood has written that Means' language "offers an exquisitely precise and sensuous register of an often crazy American reality". In Hystopia, his highly anticipated first novel, David Means brings his full talent to bear on the crazy reality of trauma, both national and personal. Outlandish and tender, funny and violent, timely and historical, Hystopia invites us to consider whether our traumas can ever be truly overcome. The answers it offers are wildly inventive, deeply rooted in its characters, and wrung from the author's own heart.