Flag Friday: Flag of the Domination of Draka by KingWillhamII

I get nostalgic about the era when I first discovered alternate history. Soc.history.what.if was slowly being replaced by AlternateHistory.com and everyone seemed to have a GeoCities page. It was during that time when I first read Ian Montgomerie's take on SM Stirling's Draka books. Trying to make those books more "plausible" is a popular past time for alternate historians, but this was the first one I ever read.

So when I heard that Lynn Davis, one of my favorite alternate cartographers, was making a map based on Ian's version, I was excited. As I write this post the map hasn't come out yet, but here is the flag that goes with it: 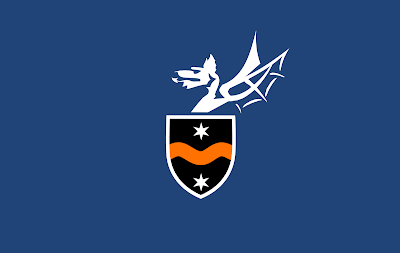 It was created by KingWillhamII of DeviantArt and is the flag of the Domination of Draka after it won its independence from Britain. Per the description Lynn provided: The coat of arms is Sir Francis Drake's, modified with an orange band to represent the Orange River and a dragon, the self-styled symbol of the Draka, above.

All things considered, I like the flag. The design is simple, but I do like how stylized the dragon is. More importantly, it keeps me excited for another Lynn Davis map.

What do you think of the flag?