A couple weeks ago I covered one of Rubberduck3y6's flags he has been making for his Alternate US Flags series. After going through the the 50 states, he has now moved on to the American territories, including Puerto Rico. 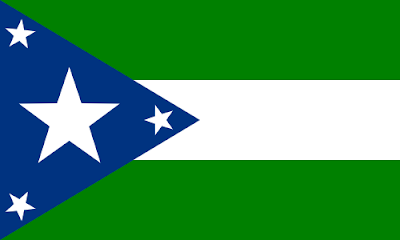 This is Rubberduck3y6's "Alternate Flag of Puerto Rico". Its very similar to the current flag of Puerto Rico, except with less stripes, no red coloring and more stars. Some of the meanings behind the symbols and colors have also changed. The white bars in the current flag stand for the republican form of government, while the single white bar in the alternate design represents the Spanish colonial period. The blue of the triangle was also meant to symbolize the coastal waters and resemble that of the flag of the United States, but in Rubberduck3y6's redesign, it just represents the Caribbean Sea.

The flag itself is a simple redesign, but I do like it. It moves the current flag away from its resemblance to the American flag, which people who would like to see Puerto Rico as independent state might like.

What do you think of the flag?