In case you guys don't follow the Flag Thread at AlternateHistory.com, one alternate vexillologist who has caught my eye is Rubberduck3y6. Although I have featured his maps before (here and here), this is the first time I am featuring any of his flags. He has a long running series called "Alternate US Flags" where he redesigns the flags of the American states and while I have featured almost all of them on social media, none have stuck out enough to make it on Flag Friday...until now. 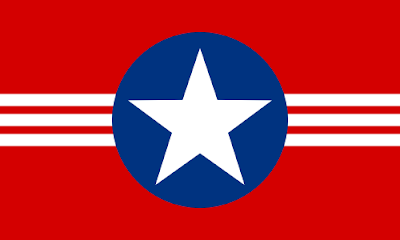 This is what I am calling the "Alternate TX Flag" and as you can probably guess, it is a redesign of the flag of Texas. Let me just say that I love this flag. Its like someone took Captain America's shield and made a flag out of it. It screams America in a bold and bright way, which is probably why its the flag of Texas actually.

I could explain what it all means, but I think its best you hear it straight from Rubberduck3y6: The flag is dominated by the famous Lone Star of Texas which gives the state its nickname of the "Lone Star State", contained within a blue disc to symbolise the motto from the obverse of the state seal, "One and Indivisible". The six white stripes represent the six nations which have controlled all or part of Texas (France, Spain, Mexico, independent Texas, the Confederacy and the United States) and also suggest two outstretched hands recalling the state motto of "Friendship" and a possible meaning of the name Texas, which is believed to mean "friends" in the Caddo language. The red and white stripes also recall the flag of the United States.

By the way, if you click on the link in the paragraph just below the flag, you can also see Rubberduck3y6's redesigns for Tennessee, Utah, Vermont and Virginia.