Paper and Fire by Rachel Caine

In Ink and Bone, New York Times bestselling author Rachel Caine introduced a world where knowledge is power, and power corrupts absolutely. Now, she continues the story of those who dare to defy the Great Library—and rewrite history...

With an iron fist, The Great Library controls the knowledge of the world, ruthlessly stamping out all rebellion, forbidding the personal ownership of books in the name of the greater good.

Jess Brightwell has survived his introduction to the sinister, seductive world of the Library, but serving in its army is nothing like he envisioned. His life and the lives of those he cares for have been altered forever. His best friend is lost, and Morgan, the girl he loves, is locked away in the Iron Tower and doomed to a life apart.

Embarking on a mission to save one of their own, Jess and his band of allies make one wrong move and suddenly find themselves hunted by the Library’s deadly automata and forced to flee Alexandria, all the way to London.

But Jess’s home isn't safe anymore. The Welsh army is coming, London is burning, and soon, Jess must choose between his friends, his family, or the Library willing to sacrifice anything and anyone in the search for ultimate control..

It is the present-day, and the world is as we know it: smartphones, social networking and Happy Meals. Save for one thing: the Civil War never occurred.

A gifted young black man calling himself Victor has struck a bargain with federal law enforcement, working as a bounty hunter for the US Marshall Service. He's got plenty of work. In this version of America, slavery continues in four states called "the Hard Four." On the trail of a runaway known as Jackdaw, Victor arrives in Indianapolis knowing that something isn't right--with the case file, with his work, and with the country itself.

A mystery to himself, Victor suppresses his memories of his childhood on a plantation, and works to infiltrate the local cell of a abolitionist movement called the Underground Airlines. Tracking Jackdaw through the back rooms of churches, empty parking garages, hotels, and medical offices, Victor believes he's hot on the trail. But his strange, increasingly uncanny pursuit is complicated by a boss who won't reveal the extraordinary stakes of Jackdaw's case, as well as by a heartbreaking young woman and her child who may be Victor's salvation. Victor himself may be the biggest obstacle of all--though his true self remains buried, it threatens to surface.

Victor believes himself to be a good man doing bad work, unwilling to give up the freedom he has worked so hard to earn. But in pursuing Jackdaw, Victor discovers secrets at the core of the country's arrangement with the Hard Four, secrets the government will preserve at any cost.

Underground Airlines is a ground-breaking novel, a wickedly imaginative thriller, and a story of an America that is more like our own than we'd like to believe. 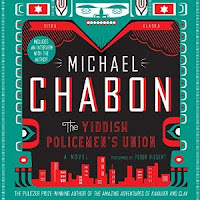 For 60 years Jewish refugees and their descendants have prospered in the federal district of Sitka, a temporary safe haven created in the wake of the Holocaust and the shocking 1948 collapse of the fledgling state of Israel. The Jews of the Sitka District have created their own little world in the Alaskan panhandle, a vibrant and complex frontier city that moves to the music of Yiddish. But now the district is set to revert to Alaskan control, and their dream is coming to an end.

Homicide detective Meyer Landsman of the district police has enough problems without worrying about the upcoming Reversion. His life is a shambles, his marriage a wreck, his career a disaster. And in the cheap hotel where Landsman has washed up, someone has just committed a murder - right under his nose. When he begins to investigate the killing of his neighbor, a former chess prodigy, word comes down from on high that the case is to be dropped immediately, and Landsman finds himself contending with all the powerful forces of faith, obsession, evil, and salvation that are his heritage.

At once a gripping whodunit, a love story, and an exploration of the mysteries of exile and redemption, The Yiddish Policemen's Union is a novel only Michael Chabon could have written.