In Time Rep, Peter Ward took up the mantle of Douglas Adams, penning a dizzying, inventive, giddily fun adventure story of time travel and its discontents. Now comes a sequel with even more excitement! Even more romance! Even more danger! And maybe some better jokes!

Imagine you just saved the world from an alien invasion. If it wasn’t for you, everyone would be dead.

That’s exactly what happens to Geoffrey Stamp, but there’s just one problem―he can’t tell anyone. You see, Geoffrey is a Time Rep―a tour guide for the 21st Century, meeting people from the future who travel back in time for their vacation. Everything he does needs to be kept a secret from the people in his own time, otherwise he risks changing the course of history.

And that caused enough trouble in the last book.

But now a new company called Continuum is offering holidays to the past, and they allow people to go back and change whatever they like. For Geoffrey, this sounds like a dream come true, until a future version of himself appears out of nowhere with no memory, a bullet in his back, and a Continuum business card in his pocket. Geoffrey soon finds himself in a race to solve his own attempted murder, but begins to wonder if his investigation is the very thing that nearly got him killed.

What is the truth behind Continuum, and after saving the planet, why would anyone want him dead?

The Cthulhu Wars: The United States' Battles Against the Mythos by Kenneth Hite and Kennon Bauman

From the Patriots' raid on the necromancer Joseph Curwen, to the Special Forces' assault on Leng in 2007, this unique document reveals the secret and terrible struggle between the United States and the supernatural forces of Cthulhu. In this war, immortal cultists worship other-dimensional entities, and plot to raise an army of the dead. Incomprehensible undersea intelligences infiltrate and colonize American seaports, and alien races lurk beneath the ice of Antarctica and high in the mountains of Afghanistan. It is only through constant vigilance and violence that the earth has survived. Also included are threat reports describing the indescribable-- humanity's deadliest foes serving Cthulhu and the other Great Old Ones. Strange times are upon us, the world is changing, and even death may die-- but, until then, the war continues.

Ghosts of Karnak: A Ghost Novel by George Mann

A woman is found dead on the streets of New York, ancient Egyptian symbols carved into her flesh. A ghostly figure is seen floating over the rooftops of the city. And an expedition returns from Cairo to exhibit their finds at the Metropolitan Museum of Art. Gabriel’s old friend and lover, Ginny Gray, was part of the expedition, but when Gabriel goes to meet the ship, Ginny is not on board.

Ancient forces are stirring and the Ghost, Ginny and Gabriel’s friend Donovan are caught right in the middle…

Cities were crushed by the falling spacecraft—but one ship didn’t crash. It remained intact, and disgorged hordes of alien soldiers determined to fight to the death.

The abandoned vessels also contained a wealth of advanced technology. Led by David Levinson, the greatest minds of our world developed deadly new hybrid weapons. Bases were built on the Moon, Mars, and beyond.

A new generation of defenders had to be trained, for the invaders would return. In the headlong rush to prepare, however, not everyone would survive…

Making the Rounds by Allan Weiss

...when a word decides to get up and leave your holy book?
...when you’re a mayor and your city is literally crumbling around you?
...when the evil Haman, villain of the Purim story, seems to have arisen from the dead to terrorize your town?

Eliezer ben-Avraham, wizard, Kabbalist, and kvetch, not only can but must help. Because he poked around in areas of forbidden knowledge, he is obliged to wander the world and use the powers he gained to perform good deeds—mitzvot—for anybody who asks, no matter how bizarre the task. Ably assisted by his trusty but cynical steed, Melech, Eliezer does what he can, although transforming into a bird and flying around is difficult when you have arthritis in your shoulder.

Humorous, philosophical, and very weird, Eliezer’s adventures as he makes his rounds demonstrate how important it is to be generous with your gifts, even to the craziest goyim.

The ghost of Sherlock Holmes is dead, but who will solve his murder? The Great Detective's ghost has walked London's streets for an age, given shape by people's memories. Now someone's put a ceremonial dagger through his chest. But what's the motive? And who - or what - could kill a ghost? When policing London's supernatural underworld, eliminating the impossible is not an option. DI James Quill and his detectives have learnt this the hard way. Gifted with the Sight, they'll pursue a criminal genius - who'll lure them into a Sherlockian maze of clues and evidence. The team also have their own demons to fight. They've been to Hell and back (literally) but now the unit is falling apart ...

Tensions arise aboard the sub as specimens are shipped back for study. Meanwhile, Adams and co. get to grips with their extraterrestrial armaments and discover the real motivation behind the alien crash...

The Revolution Will Be Televised, Retweeted And Liked
August 2011
The London riots - coordinated by technology and social media - have brought the city to its knees.

Historic buildings have been burned to the ground. Shops are looted, businesses and homes destroyed at random.

The politicians try to resolve the crisis, but the Houses of Parliament are no longer a match for the influence of the Internet, where two alternative leaders have emerged in an online battle for the future soul of London.

Sadie Hobbs - Reality TV star and blogger. Loathed and controversial, she urges 'normal’ society to fight back against Chester George and the 'feral rats’ destroying the city.

The fate of London hangs in the balance. And when the day of reckoning comes, hundreds of thousands of people - including sixteen-year-old Mack Walker - will descend upon the city for the final showdown - and a day that London will never forget.

The Long Century: The Congress of New Niagara, 1920 by William Weber

Having won the Presidential election of 1912, Theodore Roosevelt intervened to end the European War of 1914 by hosting the Congress of Annapolis. Shortly thereafter, he invaded and annexed "Norte Mexico." Now mayor of industrialist King Champ Gillette's futuristic City of New Niagara, Roosevelt has invited the major powers to this nascent metropolis to strengthen international cooperation by defusing rising tensions, resolving issues left over from their previous summit, and combating threats from nationalists and anarchists. He has the full support of his successor, President Hiram Johnson, who is running for reelection, but some of his former progressive allies have their doubts. He also has the talents and skills of his chief aide, William Donovan, who has served as his roving foreign ambassador and finds himself charged with overseeing the security of the Congress.

The story is revealed through a compilation of the articles, notes, and letters of two reporters from the Philadelphia Public Ledger. David Woodhurst who covers Buffalo, New Niagara, and Niagara Falls, focuses on tensions between Roosevelt and the city manager, who actually runs the city. Gregory Sheridan, posted to London, provides the perspectives of the European delegations that sail for America aboard RMS Lusitania. Their competition in covering the planning and execution of the summit gradually unveils the diplomatic struggles, as well as the conspiracies, that threaten to upend the Congress and wreak havoc on Gillette's shining new city.

Warlock Holmes: A Study in Brimstone by G. S. Denning 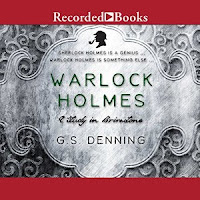 Sherlock Holmes is an unparalleled genius who uses the gift of deduction and reason to solve the most vexing of crimes. Warlock Holmes, however, is an idiot. A good man, perhaps; a font of arcane power, certainly. But he's brilliantly dim. Frankly, he couldn't deduce his way out of a paper bag. The only things he really has going for him are the might of a thousand demons and his stalwart flatmate. Thankfully, Dr. Watson is always there to aid him through the treacherous shoals of Victorian propriety and save him from a gruesome death every now and again.

An imaginative, irreverent, and addictive reimagining of the world's favorite detective, Warlock Holmes retains the charm, tone, and feel of the original stories by Sir Arthur Conan Doyle while finally giving the flat at 221b Baker Street what it's been missing for all these years: an alchemy table. Reimagining six stories, this riotous mash-up is a glorious new take on the ever-popular Sherlock Holmes myth, featuring the vampire Inspector Vladislav Lestrade; the ogre Inspector Torg Grogsson; and Dr. Watson, the true detective at 221b. And Sherlock. A warlock.