A Murder in Time by Julie McElwain

When brilliant FBI agent Kendra Donovan stumbles back in time and finds herself in a 19th century English castle under threat from a vicious serial killer, she scrambles to solve the case before it takes her life―200 years before she was even born.

Beautiful and brilliant, Kendra Donovan is a rising star at the FBI. Yet her path to professional success hits a speed bump during a disastrous raid where half her team is murdered, a mole in the FBI is uncovered and she herself is severely wounded. As soon as she recovers, she goes rogue and travels to England to assassinate the man responsible for the deaths of her teammates.

While fleeing from an unexpected assassin herself, Kendra escapes into a stairwell that promises sanctuary but when she stumbles out again, she is in the same place - Aldrich Castle - but in a different time: 1815, to be exact.

Mistaken for a lady's maid hired to help with weekend guests, Kendra is forced to quickly adapt to the time period until she can figure out how she got there; and, more importantly, how to get back home. However, after the body of a young girl is found on the extensive grounds of the county estate, she starts to feel there's some purpose to her bizarre circumstances. Stripped of her twenty-first century tools, Kendra must use her wits alone in order to unmask a cunning madman.

In an instant, a blinding flash of light carved New York City into pieces and a million people died. The disaster remained a mystery until seven years later, when newly minted time travelers Charlotte, Monroe, and Bill discover The Blast was caused by one of their own. The Blast shouldn't have happened--history has been rewritten--meaning millions of lives can be saved, but at what cost? Even if they can defuse every bomb that caused the disaster, their own history will be rewritten in unpredictable ways. They could come back to a future where Charlotte never had a son, where Monroe and Bill never fell in love, or even where one of them died years ago.

'The second fall of Rome?' Aurelia Mitela, ex-Praetorian and imperial councillor in Roma Nova, scoffs at her intelligence chief when he throws a red file on her desk. But 1980s Roma Nova, the last province of the Roman Empire that has survived into the twentieth century, has problems - a ruler frightened of governing, a centuries-old bureaucracy creaking for reform and, worst of all, a rising nationalist movement with a charismatic leader. Horrified when her daughter is brutally attacked in a demonstration turned riot, Aurelia tries to rally resistance to the growing fear and instability. But it may already be too late to save Roma Nova from meltdown and herself from entrapment and destruction by her lifelong enemy...

Masks and Shadows by Stephanie Burgis

The year is 1779, and Carlo Morelli, the most renowned castrato singer in Europe, has been invited as an honored guest to Eszterháza Palace. With Carlo in Prince Nikolaus Esterházy's carriage, ride a Prussian spy and one of the most notorious alchemists in the Habsburg Empire. Already at Eszterháza is Charlotte von Steinbeck, the very proper sister of Prince Nikolaus's mistress. Charlotte has retreated to the countryside to mourn her husband's death. Now, she must overcome the ingrained rules of her society in order to uncover the dangerous secrets lurking within the palace's golden walls. Music, magic, and blackmail mingle in a plot to assassinate the Habsburg Emperor and Empress--a plot that can only be stopped if Carlo and Charlotte can see through the masks worn by everyone they meet.

Brilliant, distracted, sarcastic, abrasive, superior, fiercely loyal and—above all—ferociously principled, Sherlock Holmes is a hero for all times. Every era has its thieves and monsters, its exploiters and abusers, and in every era the detective of Baker Street will piece together the clues and bring the guilty to book.

In alt.sherlock.holmes, the creators of Two Hundred and Twenty-One Baker Streets have invited three talented writers to bring startling visions of the Great Detective and the redoubtable Doctor Watson to the page: as a carnival owner and fortune teller in the ’thirties American Dust Bowl, as a drugged-up, tuned-out weirdnik in ’sixties New York City, and as the most irregular consultant in present-day Hollywood.

The game’s afoot! Whether hunting a vandal, a killer, or a shadowy conspiracy, in Indiana, California or New York, Holmes and Watson are on the case.

Far Enough Away by Dusk Peterson

"He came down the mountain one early summer afternoon, toward the end of what had not yet been dubbed the Hydrogen War. He was just in time to catch the climax of the war."

He knew he wasn't normal. Now he must save others who have been left behind.

For two years, since his parents left for the west coast of the continent, Phillip Schafer has lived in a mountain home, as far as he can get from society. But when the loss of his beloved companion forces him out of his refuge, he finds that the world is on the cusp of change. And he may be one of the few people left who is able to outrace that change.

Accompanied by two unusual allies, Phillip must escape from his nation before disaster strikes. But with no jet-car, he must somehow reach the skyport before the last rocket blasts off. . . .

It is a time of jet-cars, Astroware parties, and microfiche newspapers. It is our future as it was envisioned in the 1950s and 1960s. This retrofuturistic short story of disability and friendship can be read on its own or as part of the "Atompunk" volume of Young Toughs, an alternate history series about the struggles of youths in the nineteenth and twentieth centuries.

Young Toughs is part of Turn-of-the-Century Toughs, a cycle of alternate history series (Young Toughs, Waterman, Life Prison, Commando, Michael's House, The Eternal Dungeon, and Dark Light) about adults and youths on the margins of society, and the people who love them. Set in the nineteenth and twentieth centuries, the novels and stories take place in an alternative version of America that was settled by inhabitants of the Old World in ancient times. As a result, the New World retains certain classical and medieval customs.

No Hint of War: An Alternate WWII: Volume 2 by Joseph Major

As America is flung into the World War, a troubled man and a secretive woman are brought together across the world, while they and their families find themselves engaged all over the world. Against their struggled, the United States girds itself for war, the United Kingdom and its Empire settle down to meet their fate, and battles take place by sea, air, and land. The great and the small are set on the course to victory, the long struggle that must be won, In this second novel of the series, the story continues with its characters going forward to triumph or disaster.

The Plot Against America by Philip Roth 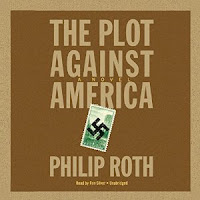 In an astonishing feat of empathy and narrative invention, our most ambitious novelist imagines an alternate version of American history.

In 1940 Charles A. Lindbergh, heroic aviator and rabid isolationist, is elected president. Shortly thereafter, he negotiates a cordial "understanding" with Adolf Hitler while the new government embarks on a program of folksy anti-Semitism. For one boy growing up in Newark, Lindbergh's election is the first in a series of ruptures that threaten to destroy his small, safe corner of America - and with it his mother, his father, and his older brother.