There is a popular alternate history trope (which I considered doing for Trope Talk) where the nations of Scandinavia (and maybe a few other states around the Baltic Sea) unite to form one nation. There is historical precedent for this in the form of the Kalmar Union, a personal union that joined under a single monarch the three kingdoms of Denmark, Sweden (then including Finland), and Norway (plus its colonies). Legally the countries remained separate sovereign states, but with their domestic and foreign policies being directed by a common monarch. As you may know, it didn't last and today the countries are all separate states.

Alternate historians, however, have speculated on multiple ways these Nordic countries could have become one nation (and only occasionally did they have to nuke the world to accomplish it). I assume this was what the creator of this flag was doing when he or she created the "Royal Standard of Scandinavia": 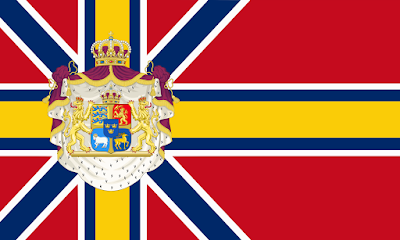 Although posted by a "Luddicus" on the Vexillology subreddit, I can't say with certainty if he or she was the creator. The flag was tagged as "Fictional" and, if I understand the rules currently, that is used when posting a flag that you did not create. Regardless of who created, it is a well designed flag that help captures some of the elements of the flags from that region. Two commentators pointed out that the flag reminded them of the Confederate States and Novorossiya, but I still think you can see the flags from the actual nations in there as well.

That being said, I kind of like the idea of a united Scandinavia stretching to the Black Sea and North America...

Honorable mention this week goes out to the "Flag of the Minoan Empire" by Sam McDonald and don't forget to check his recent edition of The Audio File.