I know I said I would explain some of the changes I would be making to The Update and my other alternate history projects on Friday, but then I realized something very important: telling you all of it would be boring. So instead of explaining what I am going to do, I am just going to do it. The return of Flag Friday was the start of said changes. Next week I will be giving you another reason to support me on Patreon, which is something I should have done a long time ago.

As of now, I would like to introduce a new schedule, which I will do my best to follow:
Still dealing with a cold (or something worse) so no videos anytime soon. I did just read George RR Martin's Doorways and I was thinking of doing a video review on it, but we will see since I also found a recording of the pilot that the comic is based on, so I may just watch and review that instead. In the meantime, any recommendations for how to get rid of a persistent cough will be welcome.

Sherlock teams up with The Doctor in the ALL-CONSUMING FIRE 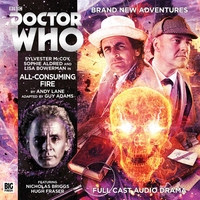 In 1994, Andy Lane published the novel All-Consuming Fire. It featured the Seventh Doctor from Doctor Who teaming up with Sherlock Holmes and Doctor Watson to battle mosters from HP Lovecraft's Cthulhu Mythos. Damn! How the hell did I miss this fictional mashup? According to Wikipedia, it even has a reference to Charles Beauregard of Kim Newman's Anno Dracula series, thus tying the novel into a well-known alternate history series.

Of course if you ask someone in the present what they would think of a Doctor Who/Sherlock crossover, they would think of the new Doctor Who series and Sherlock, the modern-day retelling of the famous detective, both of which are produced by Steven Moffat. A lot of fanboys and fangirls have dreamed of such a crossover, but no one seems interested in creating it. I personally would love to see a non-canon special. It doesn't even have to be a full episode. Just create a YouTube short for charity or something and I promise you people would throw money at it.

Nevertheless, someone thought that they could tap into the demand that the Doctor team up with Sherlock and thus we now have a radio play that has adapted the story from an All-Consuming Fire. Here is the description from Big Finish:

The Library of St. John the Beheaded contains the most dangerous books in all creation so when some of them are stolen who else should the Vatican call but Sherlock Holmes?

Immediately, one of the possible suspects seems more suspicious than others. He has no traceable background, refuses to give straight answers and hides behind a pseudonym. However, Holmes and his loyal friend Watson soon realise this suspect is also their greatest hope: war is brewing and an Old God is rising, to save humanity they need The Doctor as much as he needs them.

The play actually features Sylvester McCoy and Sophie Aldred reprising their roles as The Doctor and his companion, Ace, respectively. Meanwhile we have another Doctor Who alum, Nicholas Briggs (who is the voice of the Daleks), take on the role of Sherlock. Although I haven't listened to it yet, I am extremely interested in seeing two titans of British fiction take on the monsters from one of America's masters of horror. Although we can probably guess the ending, I just hope the journey makes it worthwhile.

Matt Mitrovich is the founder and editor of Alternate History Weekly Update, a blogger on Amazing Stories and a Sidewise Awards for Alternate History judge. When not writing he works as an attorney, enjoys life with his beautiful wife Alana and prepares for the day when travel between parallel universes becomes a reality. You can follow him on Facebook, Twitter and YouTube. Learn how you can support his alternate history projects on Patreon.
Posted by Mitro at 10:55 AM