Map Monday: The World of Lord Roem's La Isla Blanca at the End of 2014 AD by Bruce Munro

You can't deny that Bruce Munro makes some of the best map covers of existing alternate histories. His "The World of Lord Roem's La Isla Blanca at the End of 2014 AD" is no exception: 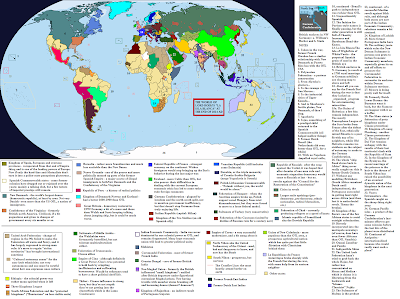 This is based off of Jack "Lord Roem" Tindale's "La Isla Blanca", which was expanded into a 53 page e-book of the same name under the Sea Lion Press banner (although now that I look at it, $2.99 is a steep price for such a short "book"). A brief summary of the story: the Spanish Armada occupies the Isle of Wight and this severely alters the histories of both Spain and Britain. In fact, the "La Isla Blanca" timeline can almost be seen as the mirror universe to our own history. France has a 20th century similar to Germany's, which Russia/Middle East and Korea/Japan appeared to have switched places as well. There are a lot interesting references to today's geopolitical situation scattered throughout the map and part of the fun is trying to find them all.

As for the map itself, it is the Munroist style with tons of details and snarky humor. Really not much to say other than that. If you are not a fan of the style, you probably won't like this map, but I personally feel you would be missing out if that was true.