Should You Judge an Indie Book By Its Cover? 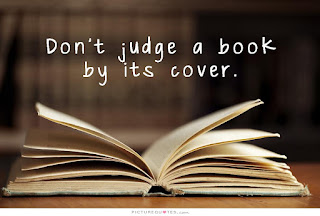 One of the recurring segments on my YouTube channel, Unboxing Alternatives, has quickly become a show where I literally judge a book by its cover before I give an actual review. Of course, many people have heard of the old saying "don't judge a book by its cover" and some have questioned whether I should criticize books, especially self-published books, by their cover at all. I respectfully disagree with those people and stand by my choice to judge a book by its cover. A book cover, like any piece of art, is open to reasonable criticism...even the covers of indie books.

You see a good book cover really isn't that expensive. A quick search of DeviantArt and even the new website, Alternate History Fiction, shows there are people who can design book covers for affordable prices. Yes it still costs money and I understand not everyone may have the financial resources, but we aren't talking about the down payment on a house here. What we are talking about is an image that is often a potential reader's first impression with an author's work. Thus their really is no excuse for a self-published author or indie publisher to not put some money behind a good cover.

The big issue is that I found that a lot of self-published authors and indie publishers just take the easy route and add white text to a stock image. This to me shows they are not putting effort into something that is relatively simple to obtain and if they are not putting effort in this area, what else are they not putting effort into? Has anyone looked at the story who actually knows how to edit? Has anyone read the story to check for plot holes and other problems? Is the e-book file correctly formatted for e-readers? Did the author just rush everything just so he or she can say they published a book?

My own experience reading and reviewing indie works has shown me this rule-of-thumb: a better quality book cover often means better quality writing. Its not an absolute rule (Outrageous Fortunes by Steven White is an exception), but I have seen other reviewers agree with me on this rule. It makes sense in my mind because a good self-published author or indie publisher does everything possible to put the best book out there that they can, especially since they don't have the support of a major publisher with people on staff to do that job for them. That kind of effort will reflect in the quality of the story as well.

Some have suggested that book covers will become irrelevant due to there being more e-book only indie authors. I can't disagree more. You still need to attract attention to your book in some way, even if you don't publish a hard copy. A poor cover can stop someone from clicking on a book's Amazon page or the blog you got to review it. More importantly, self-published e-books already have a reputation for poor quality and cheap, quickly done covers aren't helping that. If indie authors and publishers want people to read their stories, they need to address some of the major issues inherent in their brand.

To be fair, it is nice to have a publisher behind you who can afford to pay a good artist to create a good cover, but I can think of many established and prolific authors who still have poor book covers. I mentioned before how much I don't like the excessive use of swastikas on books about World War II alternate histories. Don't tell me its relevant, it is still just cheap shock value and I always feel uncomfortable taking those books out in public. Additionally, Matthew Schneider-Mayerson said in his article on alternate history that the genre is popular because it allows for high concept ideas to be expressed in book covers. Just slapping a swastika on same famous landmark where it doesn't belong is just as lazy as using a stock image in my opinion.

That all being said, I understand that people are concerned about is that you shouldn't dismiss a book simply due to its cover because what's inside could still be good. Meanwhile, a book with a good cover can actually have a terrible story. I agree with both possibilities, but I also believe the phrase "don't judge a book by its cover" shouldn't be taken so literally. To paraphrase what Dale Cozort said in my interview with him, authors and publishers still need to market their book if they want anyone to read it and a book cover is the central feature of any good book marketing campaign. Your story may be excellent, but if no one wants to look past the cover, then no one is going to read it.

You should, however, take the "have cake and eat it too" saying literally. Seriously, who gets a cake to NOT eat it?