Well its that time again for another "Best of the Year" post. As usual there is nothing scientific about how I choose what is the best alternate history of 2015. Sometimes it is something I personally liked and other times its whatever got the most page views. Anything I covered in 2015 on here, Amazing Stories or YouTube is eligible, so even if something was published years ago it can still be recognized for greatness now.

With the usual disclaimer out of the way, let us begin...

I am going to have to agree with the Sidewise Judges this year. The Enemy Within by Kristine Kathryn Rusch was an engaging political thriller that I couldn't put down. It really captured the paranoia of post-JFK assassination politics and I can't recommend it enough.

It is certainly an old anthology, but Poul Anderson, Charles Waugh & Martin Greenberg's Time Wars was a fun look back at some early time travel/alternate history stories. It contained classics like Poul Anderson's "Delenda Est" and H. Beam Piper's "Gunpowder God", plus another enjoyable read from Harry Harrison, who has always been a personal favorite author of mine. Pick it up if you want to see how modern alternate historians were inspired to write.

You would think I would have picked one of the short stories from Time Wars as the best of 2015, but that honor actually goes to "The Iron Shirts" by Michael Flynn. A web original recommended by Harry Turtledove himself, its a fun twist on the Age of Exploration that packs other surprises as well. More importantly, its a sign that you don't always need Amazon to find good fiction.

I didn't review many timelines this year, but there are a couple I want to highlight for various reasons. The first is "Winged Hands of the Reich" by Alexander "SpanishSpy" Wallace, which remains one of the funnier timelines out there and a smart commentary on the alternate history genre as well. Then we have the Tarrantry Saga by its various authors. I always like highlighting old timelines that have become lost in the aether and the Tarrantry Saga deserves not to be forgotten.

I think The Manhattan Projects Vol. 1: Science Bad by Jonathan Hickman and Nick Pitarra is the only comic I actually reviewed this year, so it wins the honor by default. If you like secret history and weird, surreal scenes, then you will probably enjoy it (although I haven't picked up Volume 2 yet). I will try to make an effort to read more comics next year.

Was there any doubt I would declare Amazon's The Man in the High Castle as the best? If you have been watching my series of reviews on YouTube, you know that I have issues with the show. That being said, it is still a visually stunning series with interesting character and, more importantly, its alternate history in the mainstream done well.

Hmm...doesn't look like I reviewed any films this year. O well, I still had thoughts on some films that alternate historians might find interesting. Check out The Retro Future of Back to the Future Part II and Top 5 Dieselpunk Films, both on Amazing Stories, if you want to see me tackle alternate history cinema.

I am giving the nod for this one to The World That Wasn't podcast. They are a newcomer to the scene who we haven't heard much from in months, but hopefully they will step back into the limelight in 2016. I enjoyed their use of music, sound effects and guest historians; and I think you will too.

Although I didn't review any specific YouTube videos this year, I still need to give a shout out to Cody Franklin of the Alternate History Hub for doing a remarkable job as always. If you have a moment, check out his most viewed video of 2015:

I thought Andrew Schneider's review of Killing a King: The Assassination of Yitzhak Rabin and the Remaking of Israel by Dan Ephron deserved to get the nod in this category. Although technically a straight history book, I enjoyed reading Andrew's speculations regarding the implied counterfactuals the book contained regarding the Israeli-Palestinian conflict. You should all check it out.

This was a tough one. On one hand I can't ignore the impact that this map had on everybody: 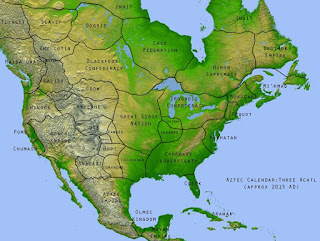 It spread like wildfire and introduced more people to the concept of alternate history then any other work in our genre. That being said, I would have to pick "Premier Empire" by Lynn Davis as my personal favorite map of the year: 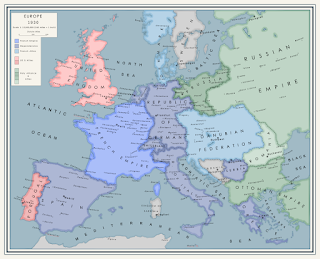 Its a great looking map from an always talented creator.

This was a difficult one as well, especially considering the next category was best guest contributor and I try to avoid giving too many awards to the same person. Nevertheless, I can't pick just one so I highly recommend you stop what you are doing and go read Alternate Nuclear Wars by Mark Appleton, Map Monday: Quantum Europe by Daniel Bensen and Historians talk about Rome all the time, but what if Ancient Egypt never fell? by Rebecca Stirling. They were some of the best articles submitted to The Update this year and you don't want to miss out.

One of the most prolific guest contributors of this blog is also the one who consistently produces top viewed articles. That contributor is Sam McDonald, whose The Audio File is one of the most successful recurring series of the year. The fact that he found a home for his work on Amazing Stories and elsewhere is testament to how much Sam has grown as a writer and I think we can continue to expect great things from him in the future.

Well as a stuttering cartoon pig once said: "That's all folks!" This is the last post of 2015. Next Monday we return to our regularly scheduled program, but I will be introducing a few new ideas just to keep things fresh. Until then, thank you for everyone who has read, watched, listened to and created alternate history this year. Go out and celebrate the new year with someone you care about and lets get ready for another year of warping history.