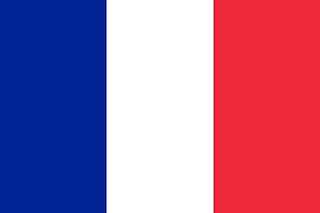 The recent Paris terror attacks was a horrific reminder that religious fanatics are still a threat to civilization. It is something that has awakened the wider world to this fact that similar recent attacks in Lebanon and Iraq have not. Nevertheless, with everyone flying the French tricolor on their profiles, I felt now may be the right time to resurrect an old segment that I like to call "Multiverse Profile". This is where I breakdown how a nation, state/province or region is portrayed in alternate history and today I would like to look at France.

Actually when I began doing research for this article I almost forgot how influential France and its people have been to the genre, which they call uchronie. In fact, the alternate history bibliography, Uchronia, got its name from the French word for alternate history. Furthermore, next to the English-language community, French speaking alternate historians have the most alternate history sites on the Internet and when it comes to this blog, France is the #5 destination for where I get the most visitors from. That is more traffic then what I get from other predominantly English-speaking countries like Australia and Canada.

Of course, that is just the present day state of alternate history in France. The French have been creating alternate history since the beginning. Some of the earliest alternate histories ever published in French include Alain-René Lesage's Les Aventures de Monsieur Robert Chevalier, dit de Beauchêne, capitaine de flibustiers dans la Nouvelle-France (1732), Jean-Baptiste-Claude Delisle de Sales' Ma République (1791) and Louis-Napoléon Geoffroy-Château's Napoléon et la conquête du monde, 1812-1823: histoire de la monarchie universelle (1836). Louis Geoffroy's novel is not only one of the earliest works of alternate history published in large quantities, it was also probably the first example of a "wank" since the novel had Napoleon unify the entire world of beating Russia and Britain. Now in hindsight creating the first wankfest probably shouldn't be celebrated, but we won't blame all of France for one guy's implausible timeline.

Now France has a long history that covers centuries of time, which means that it is rife with potential points of divergence. That being said, France often takes a secondary role in a lot of alternate histories, at least in the works published by the English-speaking community. While the number of scenarios involving Napoleon/Waterloo do rank very high according to Evelyn Leeper (especially in France itself), other parts of French history remain rather obscure. The AlternateHistory.com Wiki, however, does mention that there are still plenty of timelines where France is doing well...as long as Germany doesn't win World War I and World War II.

Still if you are curious to learn more about France in alternate history, there are plenty of portals for where you can start your journey. The aforementioned AlternateHistory.com Wiki has a list of timelines that are either France-centric or else has the country make a major appearance. The AltHistory Wiki also has a long list of nation profiles for Frances that appear on their timelines, along with two featured timelines where France takes center stage: "Napoleon's World" and "French Trafalgar, British Waterloo" (which confirms the fact that timelines where Napoleon is more successful are very popular). Finally lets not forget the hard-working editors over at Harry Turtledove Wiki who have compiled all the references to France in the works of the master of alternate history.

Of course this is just the tip of the iceberg when it comes to France's impact on our favorite genre. I am sure I missed a lot of important points and, if so, please let me know if the comments. I recommend you check out some of the links I shared and open your mind to new points of divergence that you may have avoided in the past. Also, if you liked this article, let me know. I may do more profiles on nation's and their impact on alternate history, especially on those nations that are often ignored by alternate historians.