Weekly Update #209! Baby Hitler, The Rewind Files and Treating Your Girlfriend Like A Princess in the Real World.

Well I got a lot of work done this weekend. I recorded two videos for the channels and I wrote several posts for the blog. Feeling pretty pleased with myself. Almost a shame to have to admit that I will most likely not be posting anything on Monday due to the Halloween weekend. Sorry guys, but with the holidays coming up I'm not going to be as prolific as I used to be. If you would like to help keep the content flowing, please consider submitting a guest post. You can reach me at ahwupdate at gmail dot com.

By the way, I updated one of my milestone goals on Patreon. Instead of doing a vlog series on Amazon's The Man in the High Castle, I am going to do a review of HBO's Fatherland in its place. I just couldn't keep my opinion of the new show secret for long, so prepare yourselves this November as my special guest host and I discuss what we liked and didn't like about Amazon's adaptation of Dick's famous and influential alternate history novel.

Would you kill Baby Hitler? 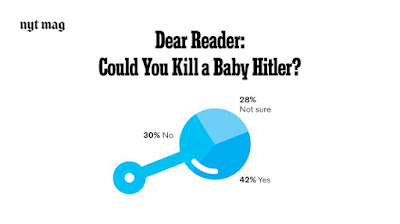 The venerable New York Times caused quite a stir the other day when they asked the question: would you kill baby Hitler? People on Twitter were less than pleased about the question for a variety of reasons. Many argued no one, not even Hitler, is born evil, so changing how he was raised is more appropriate then killing him as a baby. Additionally, explaining to the authorities that you had to kill the baby because he was evil is not going to be an effective defense in a court of law. Finally, we also had the common time travel argument that if you went back in time to kill baby Hitler, then he would never grow up to commit his crimes, thus you would have no reason to go back in time to kill Hitler, thus Hitler grows up to commit all his crimes, thus you go back in time to kill him as a baby, thus Hitler never commits all his crimes...and I just gave myself a migraine.

I have spoken about this on many occasions (most recently on my Trope Talk: No Hitler video) so I won't bore you with reiterating my thoughts again. I will share Gavriel Rosenfeld's, the counterfactual historian and the mind behind The Counterfactual History Review blog, thoughts on the subject. He did an interview with Mother Jones on this very question. Gavriel breaks down the popular hypotehtical and shows how different people from different countries can answer it. I found the whole exchange fascinating and recommend that you check it out.

In the meantime, if you do get your hands on a time machine, try to think of something better to do with it rather than baby killing.

Book of the Week: The Rewind Files by Claire Willett

This week's book of the week goes to The Rewind Files by Claire Willett. Here is the description from Amazon:

Chronologist Regina Bellows is great at her job. As a junior agent at the U.S. Time Travel Bureau she finds dangerous time anomalies caused by reckless time-travelers (basically cleaning up other people’s messes) from the comfort and safety of her desk. She knows her lack of social graces and verbal filter would make her a liability in the field.

When she accidentally uncovers a massive "chronomaly" in 1972 about a far-reaching plot to start World War III, she embarks alone on her first field mission ever - as an undercover secretary at the Nixon White House - where the race is on to find the conspirators before they find her.

She’s undertrained, inexperienced, all alone, and World War III is hanging in the balance.

What could possibly go wrong?

The people on Twitter loved this book and so did John DeNardo of SF Signal who called The Rewind Files "[a] fast-moving, first-rate time travel adventure with unexpected twists and surprises." Sounds like a good enough review to add this to my "Want to Read" pile...which never really stops growing.

Hey guys, does your significant other ever ask to be treated like a princess? Well make sure to show her this meme: 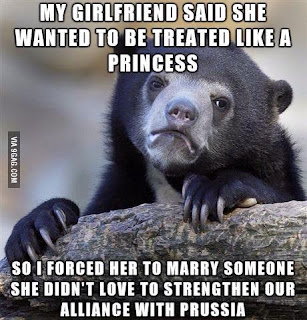 Ah, history jokes. The most nerdiest of jokes. By the way, if you want more alternate history pictures, go check out this steampunk cafe in Romania and this flying Soviet aircraft carrier.