Today's Map Monday sees the return of a veteran of this series: Lynn Davis. She posted a new map on her blog that caught my eye. It is titled: "Where Hearts Were Entertaining June: Europe 1800". Let's cut to the chase and reveal the map: 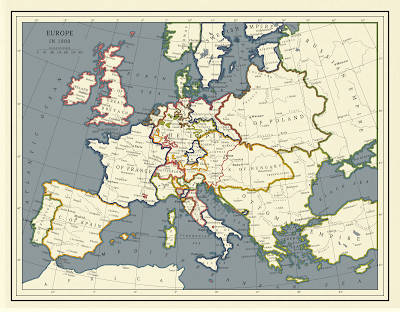 This is actually a sequel another of Lynn's maps, which was set in 1735, and takes place in her "Where Hearts Were Entertaining June: An English Brazil", which I covered on Timeline Thursday. In this timeline the English Armada is more successful and England is able to get its hands on Brazil, forever changing history. Today's map reflects the current state of affairs in Europe after republicans have come to power in Britain, Spain, Poland and elsewhere, while the remaining monarchists lick their wounds. Its a solid timeline and I recommend you check it out, but now its time to do the thing I always struggle with: commenting on art.

I have always been a huge fan of Lynn's maps. You can tell how she puts hours of work into it by just looking at all the details in the map. I especially enjoyed the use of white spaces surrounded by a colored outlines. Admittedly I do tend to praise Munroist and minimalist maps a lot, but even I enjoy a map that has a lot of effort put into it. Plus it certainly is an improvement from the map that it is a sequel of.

Honorable mention this week goes to "German Empire in 2015" by Samwell and if you want to see more alternate history maps check out the Maps and Flags Facebook group (which is also on Twitter and DeviantArt).

Matt Mitrovich is the founder and editor of Alternate History Weekly Update, a blogger on Amazing Stories and a Sidewise Awards for Alternate History judge. When not writing he works as an attorney, enjoys life with his beautiful wife Alana and prepares for the day when travel between parallel universes becomes a reality. You can follow him on Facebook, Twitter and YouTube. Learn how you can support his alternate history projects on Patreon.
Posted by Mitro at 2:00 PM