Weekly Update #204! Tajikistan, The Desert and the Blade, David SF Portree and More.

I am happy to announce I am back from my Labor Day break. I didn't mean to skip posting so many days, but sometimes life just throws unexpected obstacles in your way. The important thing is I am back and looking forward to returning to my old routine.

I am doubly happy to announce that I broke our monthly page view record again. Last August we received 27,213 views, which surpassed our previous record of 26985 in April. Thanks to everyone for following the blog and welcome to all the newcomers who no doubt stumbled upon this blog because of this map. I hope you guys liked what you saw and decided to stay, because I have a lot of good content coming your way, including a new episode on Trope Talk.

Headline: Tajikistan Discovers New Planet and Names it After Itself 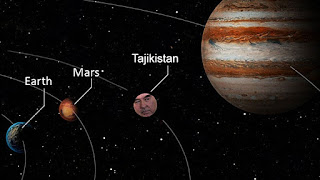 You read that title right. A couple weeks ago Boing Boing ran a story regarding how astronomers inside the nation of Tajikistan discovered a new planet between Mars and Jupiter and named it after their home country. This bizarre claim, according to the article, is believed to have been a feeble attempt by the government to boost their country's scientific reputation, although I could think of a dozen other ways to accomplish that goal that doesn't involve inventing heavenly bodies that anyone can point a telescope at confirm its nothing but bovine feces.

I mean I know people and countries boast and brag all the time. Its also not unusual for these claims to be outright lies, but claiming you discovered a new planet and even being arrogant enough to name it after yourself is a kind of lunacy that I expect from North Korea, not Tajikistan. Although Tajikistan fought a bloody civil war in the 1990s and is rife with corruption, they have actually managed to stay off the world stage. If they were trying to get some limelight then this...was a god awful way to do it.

If you are interested in other stories from the past two weeks, don't forget to check out this Egyptian mogul's plan to house refugees on Mediterranean islands.

Book of the Week: The Desert and the Blade by SM Stirling

The nod for book of the week goes to SM Stirling's newest addition to his Emberverse series: The Desert and the Blade. For those who don't know anything about this book, here is the cover description:

In his Novels of the Change, New York Times bestselling author S.M. Stirling presents “a devastated, mystical world that will appeal to fans of traditional fantasy as well as post-apocalyptic SF.”* Continuing their quest that began in The Golden Princess, two future rulers of a world without technology risk their lives seeking a fabled blade…

Reiko, Empress of Japan, has allied herself with Princess Órlaith, heir to the High Kingdom of Montival, to find the Kusanagi-no-Tsurugi, the Grass-Cutting Sword, a legendary treasure of an ancient dynasty that confers valor and victory to its bearer. Órlaith understands all too well the power it signifies. Her own inherited blade, the Sword of the Lady, was both a burden and a danger to her father, Rudi Mackenzie, as it failed to save the king from being assassinated.

But the fabled sword lies deep with the Valley of Death, and the search will be far from easy. And war is building, in Montival and far beyond.

As Órlaith and Reiko encounter danger and wonder, Órlaith’s mother, Queen Matildha, believes her daughter’s alliance and quest has endangered the entire realm. There are factions both within and without Montival whose loyalty died with the king, and whispers of treachery and war grow ever louder.

And the Malevolence that underlies the enemy will bend all its forces to destroy them.

I have always enjoyed this series and looked forward seeing more stories, even from other authors, so expect a review of this one shortly. In the meantime, you can learn what author Alyx Dellamonica thought of The Desert and the Blade and read her interview with Stirling over on her site. Also The Wild Hunt posted a review and interview as well.

Honorable mention goes out to the Wild Card series, which was called by io9 one of the best works George RR Martin created that wasn't Game of Thrones. 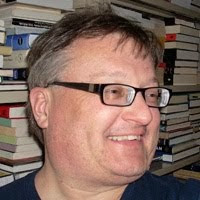 I'm pleased to announced that I have chosen David S.F. Portree to be the Alternate History of the Week. David is known for writing about spaceflight history. Some may remember him for his Beyond Apollo segment on WIRED, but today he writes his own blog called DSFP's Spaceflight History. If you don't follow it, you really should, as David publishes both traditional and alternate history articles regarding space exploration. One recent post I enjoyed was his Failure Was an Option: What If a Crew Became Stranded On Board the Skylab Space Station? (1972), but that is just one of many what ifs he has tackled.

Remind me to ask him what he knows about the planet Tajikistan.

Photo of the Week

Duffel Blog ran a funny article on the issues with the F-35 and it can be summed up entirely by the picture below: 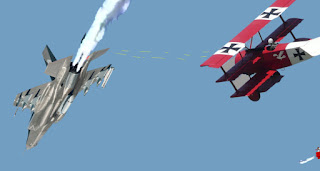 So could a propeller-driven tri-plane really take down a modern jet? No, but a fun what if to consider is the possibilities of someone from the past travelling to the present or future. We are so quick to think people from the present can "fix" or "improve" the past that we never stop and think if there is anything people from the past can help us with. Just a thought for people looking for new story ideas.

This week's nod goes to Test Tube's How Much History Has ISIS Destroyed? Check it out below:
Why is this video important? To create alternate history, you need to know real history and if real history is being destroyed, our genre dies with it. I'm not sure what we can do to stop this, but maybe in our own little ways we can work to preserve what history remains from those who wish to rewrite the past.

Honorable mention goes to the gameplay trailer for Conflicks, because sometimes we need to laugh to survive all the seriousness of the real world.